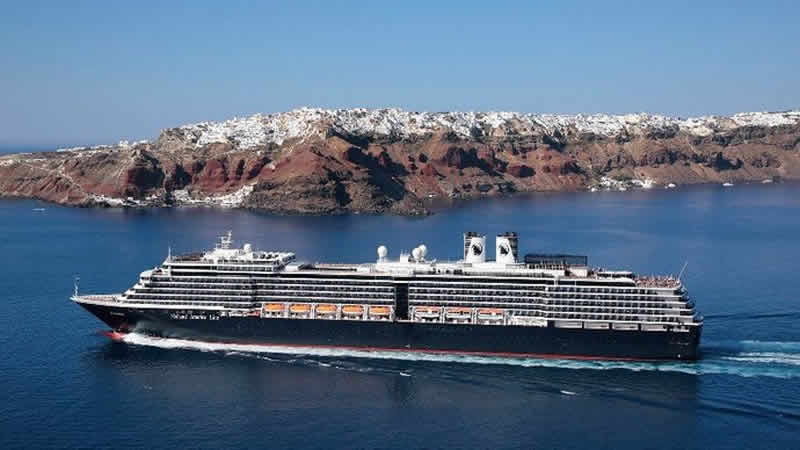 By late spring 2022, Holland America Line will have its complete fleet back cruising. This week, the line announced the restart of operations for three ships—Noordam on a March 14, 2022 voyage in Japan, Oosterdam with a May 1, 2022 cruise in the Mediterranean, and Westerdam on a May 8 Alaska voyage.

That said, with those restart dates, those three ships' previously scheduled voyages in Asia, Australia/New Zealand, SouthAmerica and Antarctica from January 2022 through the new return-to-service departure dates will be canceled. But, by spring, all will return. “We’ve been working intensely to get all of our ships back into service, and to have final restart dates that will complete the fleet is rewarding for everyone who has put their all into making this happen,” said Gus Antorcha, president of Holland America Line, in a press announcement.

He continued: “Our progressive roll-out plan allows us to be back in full service over the next several months, and we look forward to welcoming guests on all 11 ships cruising in different regions around the world.”

The three ships mentioned above will join Eurodam, Koningsdam, Nieuw Amsterdam, Nieuw Statendam, Rotterdam and Zuiderdam, which have returned to service or are slated to restart cruising by December 2021. Volendam and Zaandam will return in May 2022.

Holland America Line is working with Japanese authorities to begin cruising for Noordam next spring in Japan with four sailings scheduled.

The line expects that the ship will set sail in March on three 14-day cruises that deeply explore the country. Sailing roundtrip from Yokohama (Tokyo), Noordam will make several calls in Japan, as well as a one- or two-day visit on each itinerary to South Korea, Taiwan or Russia. These 14-day journeys can be combined to form 28-day Collectors’ Voyages.

Then in April, Noordam will sail from Japan across the Pacific Ocean and operate a season in Alaska with cruises between Vancouver, British Columbia, Canada, and Whittier, Alaska.

Oosterdam will begin cruising in the Mediterranean region on May 1, 2022. Sailing seven- to 12-day itineraries, the ship will sail the season in the region, cruising between Civitavecchia (Rome) and Venice, Italy; between Barcelona, Spain, and Venice; or roundtrip from Venice.

Following a transatlantic crossing in November 2022, Oosterdam then will transit the Panama Canal and take a southerly route to offer a series of South America and Antarctica expeditions ranging from 14 to 22 days between Buenos Aires, Argentina, and San Antonio (Santiago), Chile.

When Westerdam returns to service on May 8, 2022, the ship will embark on a season of seven-day Alaska cruises roundtrip from Seattle, Washington. Then, in September, the ship will cross the Pacific Ocean and begin a season in the "Far East" offering a variety of 14-day itineraries from Singapore; Hong Kong, China; and Yokohama (Tokyo).

Given the "later start dates" for Noordam, Oosterdam and Westerdam, the line has moved previous reservations for now canceled voyages to the following dates:

Guests also may choose to receive a 100 percent refund of monies paid to Holland America Line.

The above options are not applicable to guests booked on a charter sailing. Other booking and cancellation conditions and policies may apply if the cruise was not booked through Holland America Line.