Huvadhoo Atoll also known as Gaafu Atoll in the Maldives, a world-renowned diving destination. The crystal clear waters coupled with stunning underwater topography, and an abundance and diversity of marine life that you will find hard to believe until you've seen it with your own eyes. Colourful reef fish, large pelagics, photogenic macro subjects and beautiful corals all await your company. Whether you enjoy an exhilarating drift dive, a calm easy going exploration of a shallow reef or looking for sharks in the channels – there is something for everyone. There's a wealth of exciting dive sites waiting to be explored in this area, including colourful coral reefs, outcrops, dramatic walls, caves, tunnels, thilas (underwater islands) and fascinating channels.

Huvadhoo is the second largest atoll in the Maldives covering an area of almost 3,000 square km. The atoll's central lagoon is 40 miles (65km) across at its widest point and up to 279 feet (85 meters) deep. There are more than 230 islands at the center of its lagoon - more than any other atoll in the Maldives. It is fringed by a well-defined and almost continuous rim-reef with a deep lagoon. This atoll is a paradise for underwater adventures with scores of healthy coral islets and still undiscovered dive sites. Many of the vibrant reefs and lagoons remain unexplored, visitors here include stingrays, large numbers of turtles and a variety of sharks including black and white tip reef sharks, nurse sharks and occasionally hammerheads and tiger sharks.

The feature of the most of the atoll's dive sites is inconspicuous caves and caverns, which hide in the variety of drop-offs. Untouched rocky formations shelter many tiny underwater species, which are a godsend for macro photographers. Diving in the area is a complete pleasure, as depth range is from 8m/25ft till 30m/100ft. The substantial outer reef forms a natural barrier to the ocean's currents, and diving options are available for both beginners and advanced divers. Most of them are accessible by boat. Divers can enjoy their diving in such dive sites as Nilandhoo Kandu, Hafsa Thila, Vadhoo Thila, Kaaddhedhoo Kandu and Mofzaa Thila. All of dive spots impress with the amount of rock-formations and dense corals covering the reef.

The isolation comes from the 97 kilometer wide channel north of Huvadhoo Atoll known locally as Huvadu Kandu. It is the broadest channels between atolls anywhere in the Maldives making it a popular route for liveaboards in the Maldives. Along this channel are many low coral islands. To the south is the 49 kilometer wide Addoo Kandu (South Equatorial Channel).

During the long period of time Huvadhoo Atoll served as a trading point or a stop-by place for mariners. Administratively  Huvadhoo  is divided into two regions: Northern Huvadhoo Atoll and Southern Huvadhoo Atoll. There are not so many places for sightseeing. The most popular are Buddhist remains, scattered around both of the regions. Due to its isolation, Huvadoo Atoll also has its own dialect known as "Huvadhoo Bas." The locals are known for their friendliness and hospitality and for the top quality woven mats they produce from the local grass, 'hau' dyed black and yellow. Thousands of tourists choose this tropical destination with another aim – to relax in top-class resorts, sun-bath on palm-fringed beaches and dive in pristine ocean waters. Away from the resorts and underwater restaurants, divers choose this place to admire the vast coral reefs, which strike with colors and the diversity of marine species.

If you're lodging on the Huvadhoo Atoll, then you will transfer by domestic flight (one hour) to either Kooddoo in the north or Kaadhedhoo in the south from Male Airport. It depends on where you're staying. 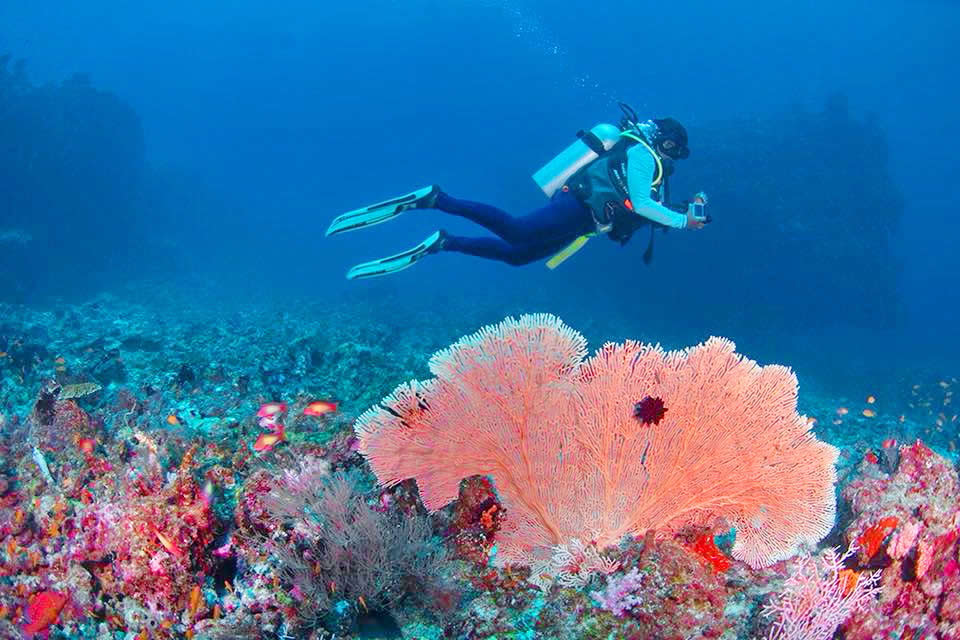 All year around. The best period for diving in Huvadhoo Atoll is North-East Monsoon: from January till May. Mainly incoming current with better visibility, stronger currents

South-West Monsoon: the rainy season runs from July till November. Mainly outgoing current with plankton rich water Temp: 28-30C. Strong winds from June-August Visibility: 15m-50m . Currents are moderate, but in some places may reach up to 2 knots.

The southernmost tip of Huvadhoo Atoll lies just 14 miles north of the equator. Weather patterns can vary from one end of the atoll to the other. However, weather year-round is tropical.The season for large pelagic fish runs May to September but with a liveaboard dive cruise in the Maldives, any sighting is possible year round. 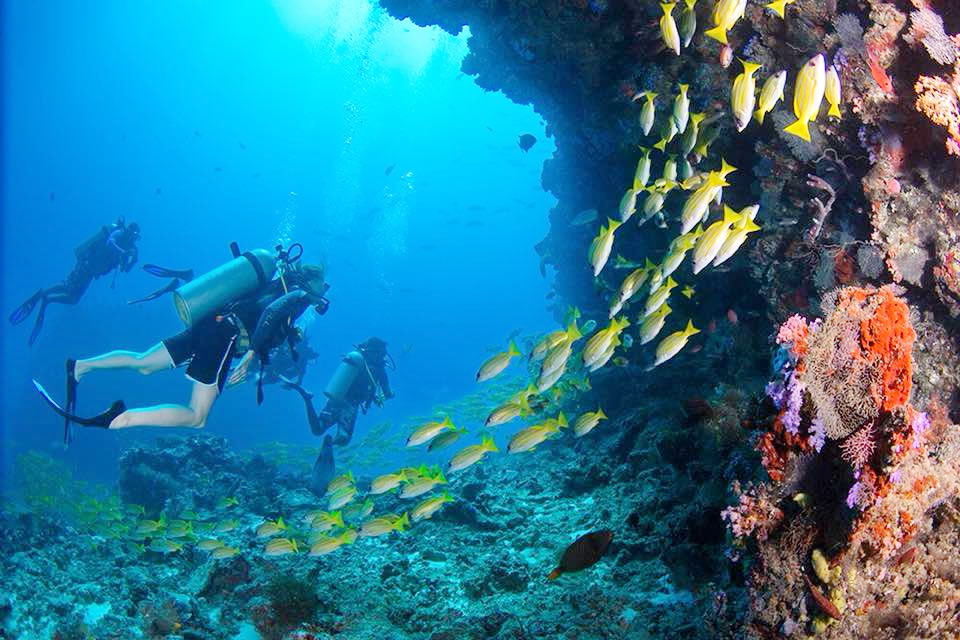 The diving is amazing in Huvadhoo atoll and the local waters are teeming with marine life. Scuba-diving in the area is presented by admiring large pelagic fish, which leisurely roam around their rocky homes. Manta rays, grey reef sharks, leopard sharks, different species of ray, wrasse, moorish idols and butterfly fish, tuna, stingray, parrotfish, surgeonfish and turtles inhabit Huvadhoo Atoll dive sites. It's also possible to see whale sharks in May and June when the currents change direction and plankton levels increase. Make sure you've got enough space in your dive log.

The most of divers visit Huvadhoo Atoll for its sharks. Nurse sharks laze in crevices and whitetip, blacktip and grey reef sharks patrol the channels. If you're lucky, tiger and thresher sharks may ascend from the deep blue on the south-west of the atoll. Hammerheads and leopard sharks can be found, but they're not as common as they are further south. Large bluefin trevally are either solitary or swim in schools to herd smaller fish into bait balls. 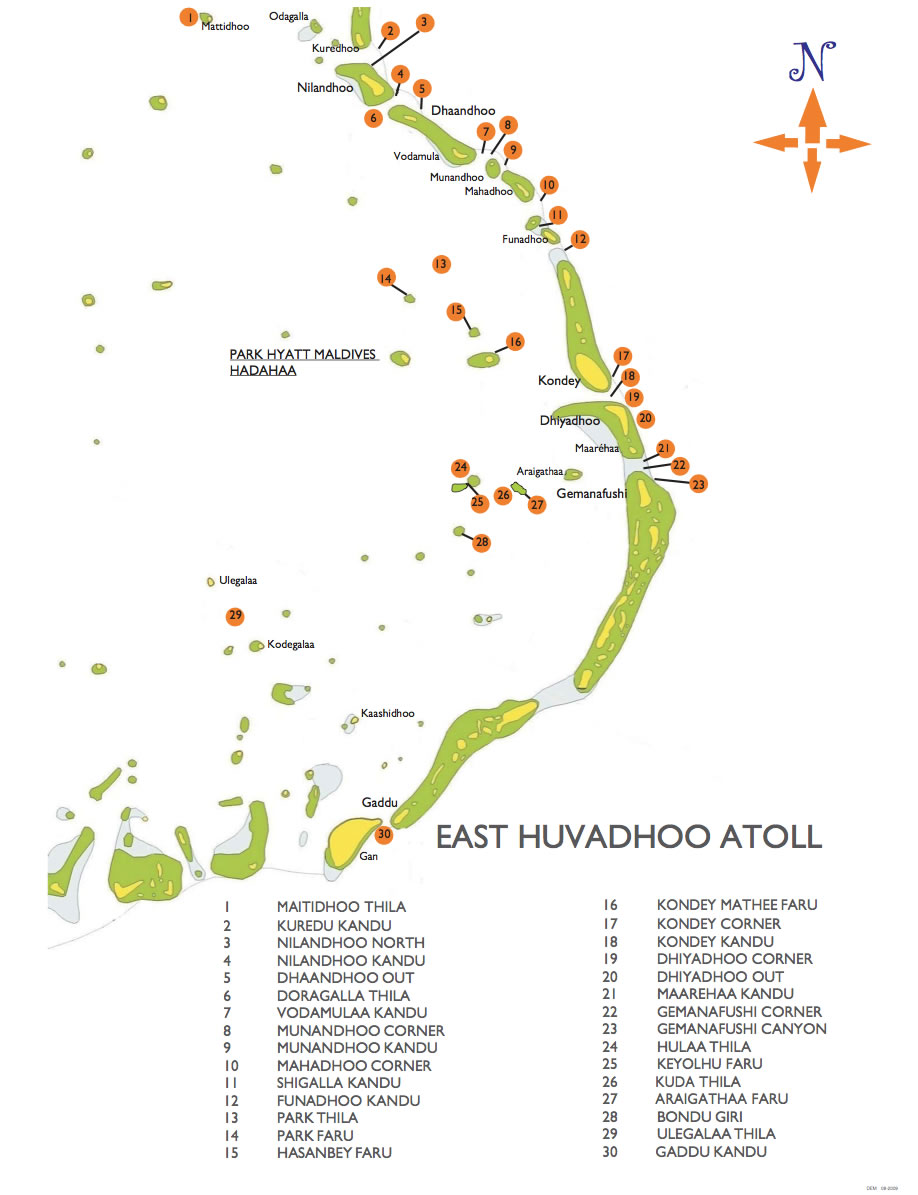 Huvadhoo Atoll represents two distinct districts, Northern Huvadhoo Atoll (Gaafu Alifu) in the north, and Southern Huvadhoo Atoll (Gaafu Dhaalu) in the south. Located in the southern stretch of the Maldives, few hotels are present and therefore tourism and traffic is limited mainly to local liveaboard cruise operations. The spectacular marine life of the Indian Ocean fills the many unexplored and vibrant reefs and lagoons creating a great variety of dive sites. Read More ...

This is a typical Maldives dive site that has a large amount of marine life, lots of beautiful reef structures, many overhangs and some steep drop offs. The depths are relatively easy but there can often be strong currents in the area. Divers will have to have the necessary experience with diving in currents to dive here. However mostly dive sites from beginners till advanced level, all of them show a very unspoiled characteristic and coral life which is tremendously good. There's a wealth of exciting dive sites waiting to be explored in this area, including colourful coral reefs, caves, thilas (underwater islands) and fascinating channels. Watch reef sharks feeding, dolphins passing by, spot moray eels hiding in holes, observe turtles searching for food or maybe even find for macro life like nudibranchs and cleaner shrimps.

Vadhoo Thila and Maarenhaa Kandu offer great shark sighting while Nilhandhoo Kanu and Ekefaru Kandu are populated mostly by barracuda and wide-eyed trivially, not to mention mammoth jackfish, and of course Manta Point, where Manta sights are all but a guaranteed. At the northern tip of Gaafu alive, divers will find a deep lagoon with brilliant displays of macro life. 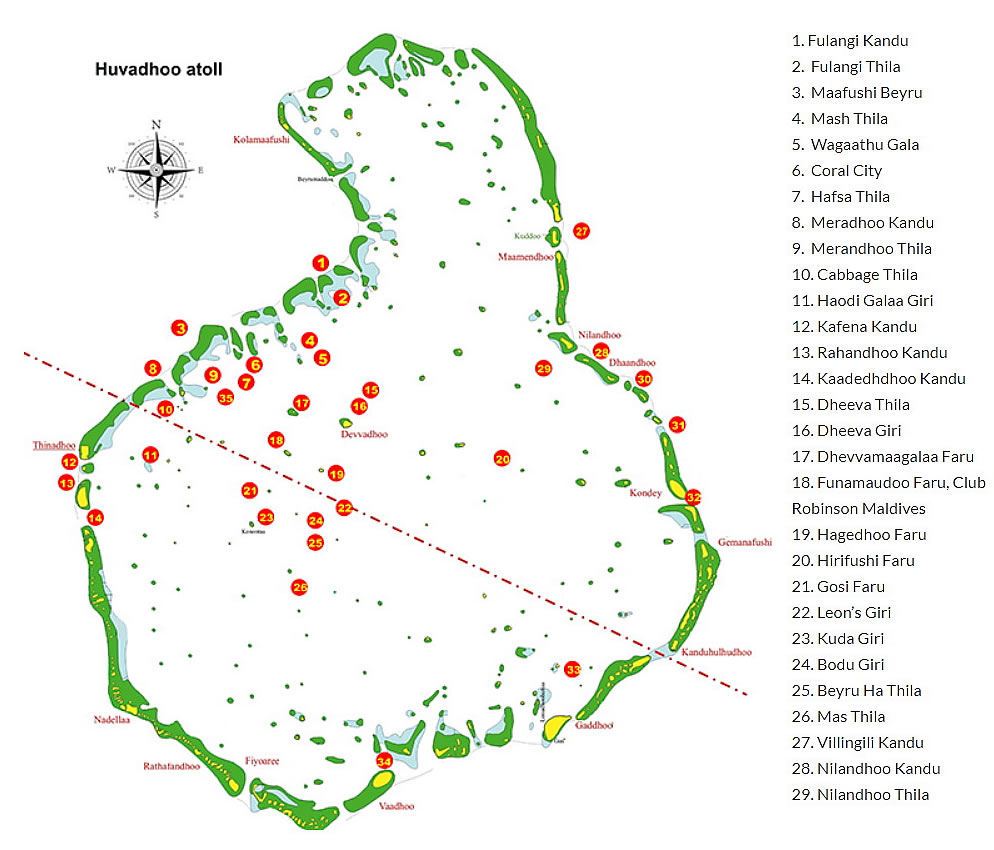 This is wide northern corner meradhoo Kandu. Top of the reef is about 10 meters and goes down to 30 meters. The ocean side is full of beautiful corals at 20-25 meters, riches in lush yellow and orange soft corals. In front, in the blue, it is easy to spot the large pelagic such as jackfish, tuna and white tip reef sharks. Often approach also eagle rays, snappers, and then also Napoleon fish, to make unique this exciting dive. Nitrox is higly recommended.

This is a very small and interesting dive site. It is totally different from other dive sites in this area. The top reef starts at 10 meters with a big coral block on top that comes up to 6 meter below the surface. On Kuda Hafsa Thila you will find a vast amount of fish, ranging from small bait fish to big tuna. Here you can also find a resident school of yellow and blue striped snappers. Sharks are regularly spotted and so are turtles. Keep your eyes peeled for the little leaf fish.

This is a classic outreef dive site. The reef starts on 5 meter and slopes down to around 15 meters, then drops down to 40 meters like a wall. This dive site is covered with beautiful corals and a lot of different reef fish. The best thing about diving on this outreef is that just about anything can make an appearance, so keep your eyes peeled and look into the blue, as big fish regularly pay a visit! Turtles, sharks, tunas, barracudas and napoleon wrasses are commonly spotted as you drift along with very little effort. There is plenty of macro life here, too, so don't forget to take some time to admire the smaller creatures, such as flatworms, nudibranches and cleaner shrimps.

During the shark dives in the Kooddoo channels, divers can expect to see: Grey Reef Sharks, Black-Tip Oceanic Sharks and there are often sightings of Hammerhead Sharks. For 2 or 3 months around January to March the live-aboard dive boats currently also these sites, but because of the long transit from Male’ in open water and unpredictable weather they do not operate there in other months. During the month of January – April, there is a special site near to Mercure Kooddoo to do night snorkeling with Whale Sharks. A special lighting technique is used to attract zoo plankton to the back of the boat and whale sharks come around to feed. It is very unique!

Nilandhoo Kandu is often one of the destinations on the routes of the liveaboards leaving from the north atolls and Huvadhoo (Gaafu) Atoll in the Maldives Islands. Drift diving here is a flight over the shining reef or a wall. While diving, divers are likely to face the strongest current near the entrance of the channel and the drop-off. The best time to dive at Nilandhoo Kandu is from January to April. The water temperature remains around 28-30C during the year. Divers may see a full spectrum of bold underwater creatures that come close, such as leopard sharks, gray reef sharks, silky sharks, schools of barracudas, small groups of eagle rays, big schools of jacks, and turtles on the sandy bottom. Nilandhoo Kandu is popular with the ‘shark trips’ and lovers of underwater photography.