Gaafu, or Huvadhoo is not only the second largest atoll in the Maldives it is also on the list of the top 10 largest natural atolls in the world. Located in the southern part of the Maldives 50 km above the equator Gaafu Atoll is administratively divided into two parts: Gaafu Alifu (North Huvadhoo atoll) and Gaafu Dhaalu (South Huvadhoo atoll) and has 235 islands with capitals: Villingili (North) / Thinadhoo ( South)

Gaafu Atoll on western maps is sometimes referred to as 'Suvadiva'. Although Huvadhoo can sometimes be mistaken for the largest atoll in the Maldives it is actually the second largest natural atoll in Maldives with a surface area just below 3200 km2. The total land area is about 38.5 km2, and around Gaafu atoll there are many small islands, islets and sand banks.

Gaafu Atoll extends for 82 km from north to south and is 65 km at its widest point in the center. The entire atoll has a round ring of reefs, containing a deep central lagoon with depths of up to 85 meters. Around Huvadhoo atoll you will find many small reefs, small coral islands and coral hills.

The outer reef of the atoll forms an intermittent barrier for the open Indian Ocean; It consists of approximately 40 small reef segments separated by deep, and sometimes narrow channels, connecting the inner lagoon with the ocean from the outside. Around these entrances and canals you will find many fish schools, large manta rays, sharks and other pelagic species inhabiting the deep blue Maldivian' waters.

The natural composition of this Maldives atoll means that there are numerous untouched dive sites full of exciting features such as caves, steep overhangs and beautiful underwater landscapes, not to mention the exciting coral formations and abundance of marine life. Therefore it is not surprising that some dive sites in Gaafu atoll have become world famous, and many liveaboards routes travel to or through Gaafu Atoll.

Gaafu Alifu is a favorite atoll for many, ideal round islands in its heart and its legendary inhabited islands along the edges. One such local island is Gaadhu Island, where the best mats are produced in the world, this is the neighbor of Gan Island on which are the ruins of a Buddhist temple lost in the jungle, and another Fiori island, on which reed is grown for mats, and where you will find one of the best in the country surf spots. Among the Gaafu's islanders the atoll also has its distinct dialect of the Dhikhevi Maldivian language, known as the "Huvadhoo Bas", mainly because of its isolation from the northern atolls in the Maldives.

Huvadhoo Kandu in the north of this atoll is the widest canal in the Maldives and has become a popular diving safari route in the Maldives. Along this canal and around many southern parts of the Huvadhoo Gaafu atoll there are small coral islands; Most of the major islands are in the south.

The islands of Gaafu Atoll have an oval shape with an average width of 400 to 800 meters with a length of 500 to 1500 meters. The significant islands that deserve mention are Vadhoo, Hoandeddhoo and Gan (the 7th largest island of the Maldives); Gan is especially famous for its spectacular liveaboard diving cruises and has become a popular stop on all diving excursions passing throug the region.

In recent years Huvadhoo atoll has become a well known tourist destination in the Maldives, thanks to its magnificent diving sites and pristine natural features. All Gaafu Atoll resorts can boast an excellent house reef snorkeling, white sand beaches and clean turquoise lagoons suitable for swimming and water sports. Today there are 7 luxury resorts, and 10 guest houses in the atoll. On local islands, budget tourism is developing successfully.

To get here, Huvadhoo has two domestic airports: on Kaadedhdhoo Island (KDM) and Kooddoo airport (GKK), both serve regular Maldivian flights from Male, Gan, and Kadhdhoo. The flight time from Male is about 55 minutes.

Built from scratch to preserve the island's natural environment, Park Hyatt Maldives Hadahaa is the pioneer of eco Read More

The Residence Maldives is an elite 5-star resort, which was designed and opened almost completely Read More

An ideal getaway for all inclusive luxury beach holiday, Ayada Maldives is a 5-star resort located amidst Read More

The Outrigger Konotta Maldives Resort is located in the stunning atoll of Gaafu Dhaalu, 340 kilometres south of Malé Read More

Amari Havodda is a secluded luxury resort ideally located in the south area of the Maldives, one of the most untouched Read More 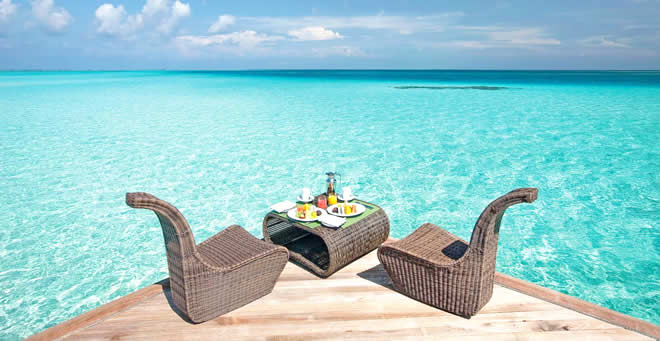 All Hotel Deals in Gaafu Atoll

Gaafu Atoll (Huvaadhoo) is the king of Maldivian atolls, located just above the equator. In fact, it is so large that it is divided into two regions - Gaafu Alifu in the north and Gaafu Daalu Read More

Gaafu Atoll is the second largest atoll in the Maldives. Divers can expect caves, steep drop offs and pristine reefs - all waiting to be explored. Gaafu Atoll is also known as Huvadhoo Atoll and is one Read More

Our interactive maps of the Maldives show all islands, hotels, resorts, airport and Gaafu Atoll on the map of the Maldives archipelago, a map of dive sites, attractions and various landmarks. Read More

All Hotel Deals in Gaafu Atoll