The Maldives are recognized as one of the best diving destinations in the Indian Ocean, and is on the bucket list of many. Sea currents give life to the reefs of the Maldives, one of the most diverse marine ecosystems in the world, and are responsible for fantastic diving in this unique part of the Blue Planet.

Corals themselves are animals that are related to sea anemones. But tropical reef-building corals have tiny plant-like organisms living in their tissue. Coral organisms, called polyps, can live on their own, but are primarily associated with the spectacularly diverse limestone communities, or reefs, they construct. The corals couldn’t survive without these microscopic algae–called zooxanthellae. The coral gives the algae a home. In return, the algae provide the coral with food. A set of tentacles surround a central mouth opening.

These single-celled algae photosynthesize and pass some of the food they make from the sun’s energy to their hosts, and in exchange the coral animal gives nutrients to the algae. It is this relationship that allows corals to grow fast enough to build the enormous structures we call reefs. The zooxanthellae also provide much of the color that corals have.

Stony corals are the most important reef builders, but organpipe corals, precious red corals, and blue corals also have stony skeletons. There are also corals that use more flexible materials or tiny stiff rods to build their skeletons—the seafans and sea rods, the rubbery soft corals, and the black corals

How Did the Coral Reefs of the Maldives Form?

In the Maldives the reefs form when corals grow in shallow water as fringing reefs close to the smaller islands. The corals will continue to push upward and outward well after the volcanic island is completely submerged. Over time, a lagoon forms between the corals and the sinking island and a house reef forms around the lagoon. Eventually, the island is completely submerged and only the ring of corals remains. This is called an atoll. Waves may eventually pile sand and coral debris on top of the growing corals in the atoll, creating a strip of land. The Maldives system of islands in the Indian Ocean are atolls.

It takes a long time to grow a big coral colony or a coral reef, because each coral grows slowly. Through the process of global warming, glacial melting and island subsidence, the level of sea gradually rises and because reef-building coral can’t grow at greater depths with insufficient sunlight, they will begin constructing their protective calcium carbonate skeletons on top of one another, at a rate fast enough to keep up with with the rising sea level. The fastest corals expand at more than 6 inches (15 cm) per year, but most grow less than an inch per year. Their growth is also influenced by the monsoonal currents that flow across the archipelago. The atolls act as a barrier to these currents and cause currents to create upwelling, bringing nutrient rich water to the surface, triggering productivity bloom and feeding frenzy. Reefs themselves grow even more slowly because after the corals die, they break into smaller pieces and become compacted. Individual colonies can often live decades to centuries, and some deep-sea colonies have lived more than 4000 years.

Why Diving in the Maldives is so Wonderful?

Two words: location and formation. A fish aggregating device (FAD) is a man-made object used to attract ocean going pelagic fish. It attracts fish for numerous reasons that vary by species. The Maldives archipelago is a giant device for the aggregation of fish in the wilds of the Indian Ocean. To the south of Sri Lanka, there is nothing else between Indonesia and Africa, about 7,000 kilometers. Why don't the fish stop here?

Sea currents tear atoll reefs, flowing between them and creating narrow and wide channels. These are the habitats of pelagics - large ocean fish - a real 'big game' for divers.

Inside the atolls there are faru and thila. They can fall sharply or gradually, have caves, overhangs or tunnels. Each variation and niche offers a home for an amazing diversity of marine life, including fish and invertebrates. 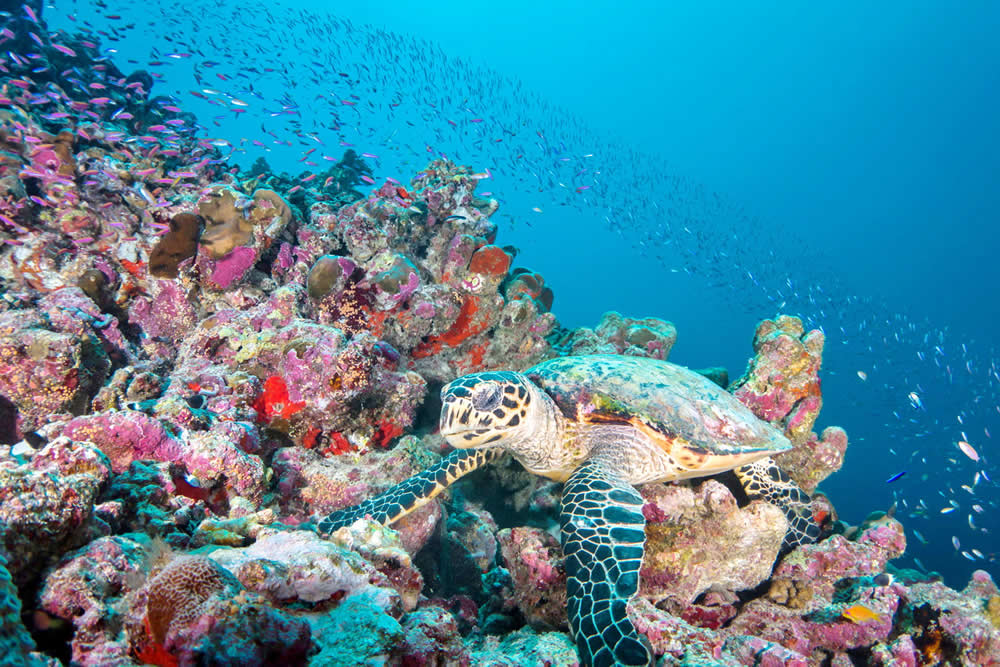 Along the reef and on the seabed in the atoll visibility can reach seventy meters, offering ideal conditions for spotting what floats around you that day. Incoming tides are clearer, while outgoing currents often carry some sediment and seasonal plankton, which reduces visibility. But of course, you need plankton if you want to see giant whale sharks and manta rays.

The outer reef slopes of the islands follow a rather similar pattern, which is directly related to various ancient sea levels. As a rule, there are terraces at depths from three to six meters, from fifteen to thirty meters and deeper at 50 meters. Then the slope sinks to the bottom of the ocean, and the inside of the atolls sinks at about fifty meters.

The cycle of coral construction caused by erosion and a large number of formations left a diverse and impressive reef architecture. Between the terraces are canyons, caves, overhangs, through ways and vertical walls, each of which itself has its own mini-ecosystem. The slower you go, and the longer you hold your gaze, the more you will find. The underwater world of the Maldives has nearly 200 species of hard corals and over 1,000 species of fish, 400 species of mollusks, 350 species of marine crustaceans ... and so on.

As for biodiversity, this is an environment equal to virgin rainforests. 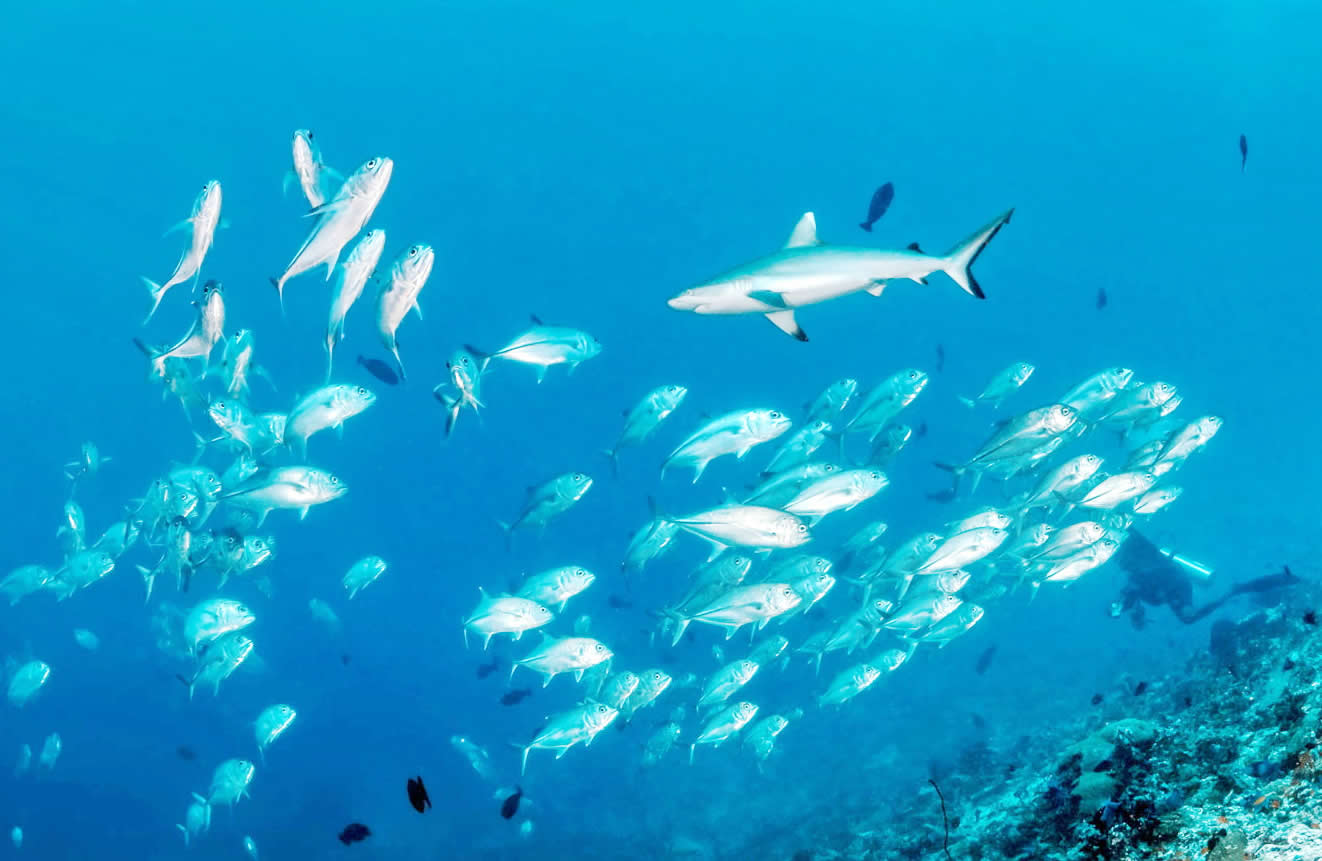 Why are Coral Reefs so Important?

Coral reefs occupy less than 0.2% of the seabed, yet are vital because in these labyrinths of living limestone scientists estimate that over one million plant and animal species are involved and they hostreceive more than 25% of all species of marine life. The reefs reduce the damage in case of storms, hurricanes, and in some way, the energy of tsunamis. In doing so, they protect both ecosystems located between the reefs and coasts, such as seagrass and lagoon for example, and human settlements located by the sea. Without this protective role, some countries in atolls, such as the Maldives, are literally built on coral reefs and would not exist and without the protective fringe

Because of the income coming directly from fishing in their waters, reefs provide resources and services worth billions of dollars every year. Millions of people around the world depend on coral reefs for food, protection and employment.

Clean water is important for corals. In the long run, however, the future of coral reefs will depend on reducing carbon dioxide in the atmosphere, which is increasing rapidly due to burning of fossil fuels. Carbon dioxide is both warming the ocean, resulting in coral bleaching, and changing the chemistry of the ocean, causing ocean acidification. Both making it harder for corals to build their skeletons. Coral’s limestone shell is formed by the ocean’s processing of carbon dioxide. Without coral the amount of carbon dioxide in the ocean rises, which in turn, affects all living things on Earth.