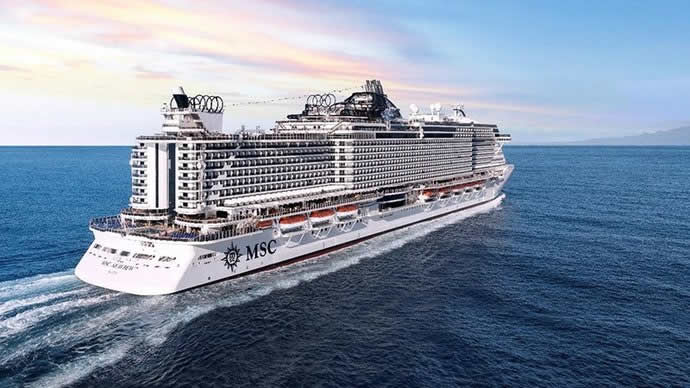 MSC Meraviglia will inaugurate year-round service on a range of itineraries from New York City, covering the Caribbean, Bermuda, New England and Canada. MSC Seaside will offer voyages from Port Canaveral, while MSC Magnifica will take guests on shorter Caribbean itineraries from PortMiami.

The cruise line plans to expand in the Caribbean and North America next year, and will offer several options for guests to travel to these regions. MSC Meraviglia will sail year-round from New York for the first time, starting April 2023, with itineraries ranging from six to 11 nights. Caribbean itineraries of either seven or eight nights will feature calls to Nassau and Ocean Cay MSC Marine Reserve. Bermuda itineraries spanning six nights will offer three days docked at King’s Wharf combined with several days at sea. Northern itineraries of either ten or 11 nights will feature calls to Boston, Massachusetts; Portland, Maine; Charlottetown, Prince Edward Island; Halifax and Sydney, Nova Scotia; and Saint John, New Brunswick. Furthermore, 11-night itineraries will include an additional call in Newport, Rhode Island.

MSC Magnifica will sail new short cruises from PortMiami of three or four nights on Fridays and Mondays to Key West, Florida; and Nassau and Ocean Cay MSC Marine Reserve.

MSC World Europa, the line’s first LNG-powered ship, will spend its maiden summer in the Mediterranean. The seven-night itineraries will feature Genoa, Naples and Messina in Italy; Valletta in Malta; Barcelona in Spain; and Marseille in France. Guests can embark from multiple ports.

MSC Poesia from Warnemunde/Berlin (Germany) and Copenhagen will offer itineraries between seven and 21 nights to Baltic capitals and four Norwegian fjords. Longer cruises include a 21-night cruise with calls to several destinations in Iceland and Greenland.

MSC Preziosa from Hamburg (Germany) will offer itineraries between nine and 15 nights to North Cape and Spitsbergen in Norway or Iceland cruises with calls to Reykjavik (overnight), Isafjordur and Akureyri, and the Orkney and Shetland Islands in the U.K., while Ireland cruises include calls in Cork and Dublin (Ireland), Belfast, Glasgow and Edinburgh (U.K.). The ship will also offer Ireland cruises with calls in Dublin and Belfast, plus Glasgow and Liverpool (U.K.). Starting from September 2023, MSC Preziosa will offer seven-night cruises visiting five of Europe’s most popular cities. The ship will call Hamburg on Sundays, Zeebrugge for Bruges and Brussels (Belgium), Rotterdam/Amsterdam (Netherlands), Le Havre for Paris (France), and Southampton for London (U.K.) on Fridays. There will be extended stays in port of up to 12 hours.

Guests can also choose from the line’s long and mini cruises. MSC Divina, from Genoa and Barcelona, will offer 11-night cruises to Canary Islands, Morocco and Madeira in October and November. From September 25 to November 19, 2023, MSC Poesia will offer 11-nights from Genoa to Greece and Turkey. Key highlights include Kusadasi/Ephesus, a full day visit in Istanbul (Turkey), Piraeus/Athens (Greece), and Palermo/Monreale and Civitavecchia/Rome (Italy). From October 2023, MSC Sinfonia will offer 11-night cruises from Genoa to Civitavecchia/Rome; Messina/Taormina/Etna Volcano (Italy); Limassol (Cyprus); Rhodes/Lindos and Heraklion/Crete (Greece); and Haifa.

Shorter cruises or weekend breaks of three to five nights with multiple ports of embarkation will be available with MSC Orchestra (May and June), and MSC Euribia and MSC Seaview (in autumn).