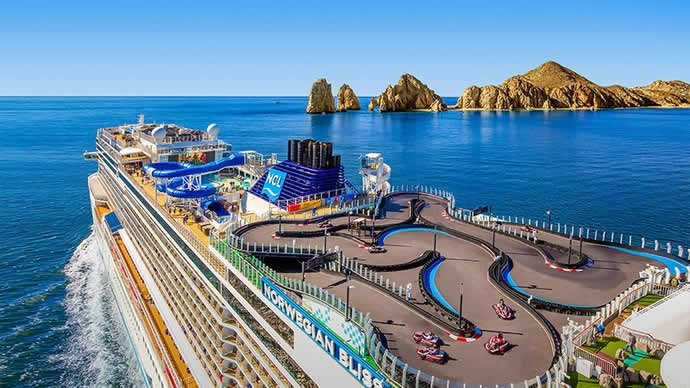 Norwegian Bliss becomes the line's second vessel to sail from the West Coast (following the August restart of its sister ship Norwegian Encore, sailing to Alaska from Seattle).

NCL’s "Great Cruise Comeback" to redeploy its entire fleet began on July 25, 2021 when Norwegian Jadebecame the first vessel to set sail with seven-day itineraries to the Greek Isles after a 500-day suspension.Norwegian Encore became the first ship in the brand’s fleet to return to cruising from the U.S. on August 7, 2021 and is currently sailing its inaugural season of week-long Alaska voyages from Seattle. On August 15, 2021, Norwegian Gem became the first vessel in the fleet to resume operations from Miami and set sail from the new Norwegian Cruise Line Terminal at PortMiami with a selection of week-long itineraries to the Caribbean and four-day sailings to the Bahamas. Norwegian Epic restarted from Barcelona on September 5, 2021 offering seven-day journeys through October 24, 2021 to the Western Mediterranean. On September 13, 2021 Norwegian Getawayrelaunched from Rome, sailing a mix of 10- to 11-day Greek Isles itineraries through October 25, 2021. On September 26, 2021, Norwegian Breakaway commenced its week-long cruises to Bermuda from New York City. Additional vessels are set to restart in North America as the fall progresses.

NCL invites travelers to witness its return to cruise journey with its five-part docuseries “Embark – The Series,” showcasing a behind-the-scenes look at the ongoing measures for a healthy and safe return to cruising. The entire first season is available on-demand at www.ncl.com/embark.

The company’s fleetwide redeployment will continue in partnership with local governments and is guided by the protocols of the company’s Sail Safe health-and-safety program, which mandates that all guests and crew must be fully vaccinated to embark for voyages through December 31, 2021.