Air Travel to the Maldives 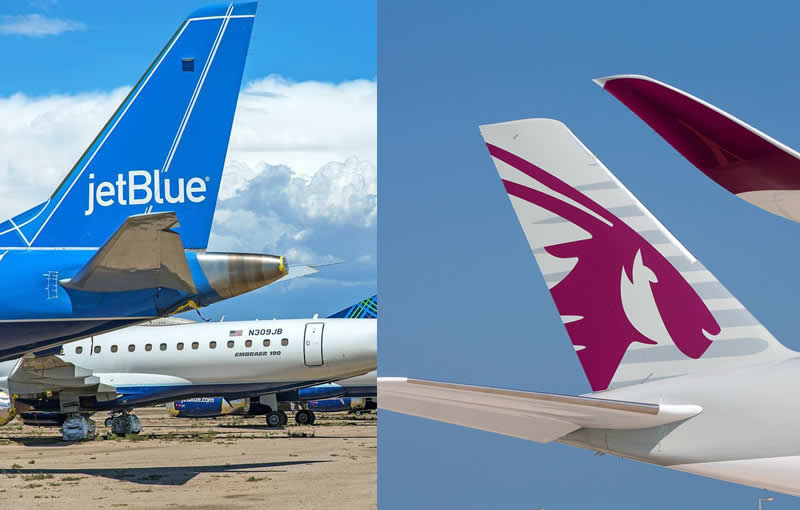 Qatar Airways announced the expansion of its strategic codeshare partnership with JetBlue that will offer the U.S. carrier’s passengers more options and convenience to book travel to international destinations. Sales have commenced with the additional codeshare flights starting from 19 April 2021 between the U.S. and Doha and 1 May 2021 for destinations beyond Doha.

JetBlue passengers can now book travel on nine routes between the U.S. and Doha and enjoy seamless connections via Hamad International Airport, the Best Airport in the Middle East, to destinations in Africa and Asia

Qatar Airways partners with U.S carriers on more routes across the United States than any other global airline with over 220 destinations available through Alaska Airlines, American Airlines and JetBlue

Qatar Airways’ 12 U.S. gateways and expanding partnerships further cement its position as the leading international carrier providing global connectivity to and from the U.S.

Qatar Airways Chief Commercial Officer, Mr. Thierry Antinori, said: “Despite the pandemic, we at Qatar Airways have continued to expand our U.S. presence by building strong relationships with our strategic airlines partners in the region and constantly optimising our connections between the U.S. and our growing network of over 130 destinations. We are delighted to welcome JetBlue to our extensive global network and offer our American passengers seamless connectivity via the Best Airport in the Middle East to more international destinations.

"By partnering with leading airlines such as Alaska Airlines, American Airlines and JetBlue, our passengers can easily connect through our 12 U.S. gateways to more than 220 markets across the U.S and over 130 destinations world-wide. We look forward to further building our strategic partnerships as global travel recovers and continuing to offer our customers the world leading services and travel experience they’ve come to expect.”

JetBlue Head of revenue and planning, Mr. Scott Laurence, said: “JetBlue and Qatar Airways lead the industry with our award-winning service and exceptional inflight experiences, which is why our partnership has been such a great success for the past decade. Now, with an expanded codeshare covering nearly a dozen major U.S. gateways or connecting points, even more travellers can enjoy a seamless global travel experience between our airlines.”

The expansion of this strategic partnership will provide more flexible travel options between the United States, the Caribbean, Latin America and Africa, Asia and the Middle East.

JetBlue passengers will also be able to book travel on seven routes beyond Doha, taking advantage of seamless connections via the Best Airport in the Middle East to and from Amman (AMM), Entebbe (EBB), Kuala Lumpur (KUL), Maldives (MLE), Muscat (MCT), Salalah (SLL), Seychelles (SEZ) and Singapore (SIN). In the short-term and subject to regulatory approvals, JetBlue will be adding many more destinations to its virtual network in cooperation with Qatar Airways across Africa, Asia & The Middle-East including Addis Ababa (ADD), Nairobi (NBO) & Kigali (KGL) enabling further connecting options between North-America and the rest of Qatar Airways’ extensive network.

This partnership also allows members of both airline’s loyalty programmes to enjoy a wider range of options. Qatar Airways’ Privilege Club and JetBlue’s TrueBlue members will initially benefit from the ability to accrue Qmiles or TrueBlue points later this year. Then, in the future, those benefits will expand with the ability to redeem points on either carrier’s flights.

The national carrier of the State of Qatar continues to rebuild its network, which currently stands at over 130 destinations with plans to increase to more than 1,200 weekly flight to over 140 destinations by end of July 2021. Qatar Airways currently operates flights to and from 12 destinations in the U.S. – Boston (BOS), Chicago (ORD), Dallas-Fort Worth (DFW), Houston (IAH), Los Angeles (LAX), Miami (MIA), New York (JFK), Philadelphia (PHL), San Francisco (SFO), Seattle (SEA) and Washington, D.C. (IAD) with Atlanta (ATL) resuming on 1 June.

Qatar Airways has become the first global airline in the world to achieve the prestigious 5-Star COVID-19 Airline Safety Rating by international air transport rating organisation, Skytrax. This follows HIA’s recent success as the first and only airport in the Middle East and Asia to be awarded a Skytrax 5-Star COVID-19 Airport Safety Rating. These recognitions provide assurance to passengers across the world that airline health and safety standards are subject to the highest possible standards of professional, independent scrutiny and assessment. For full details of all the measures that have been implemented onboard and in HIA, please visit qatarairways.com/safety.

A multiple award-winning airline, Qatar Airways was named ‘World’s Best Airline’ by the 2019 World Airline Awards, managed by Skytrax. It was also named ‘Best Airline in the Middle East’, ‘World’s Best Business Class’, and ‘Best Business Class Seat’, in recognition of its ground-breaking Business Class experience, Qsuite. The Qsuite seat layout is a 1-2-1 configuration, providing passengers with the most spacious, fully private, comfortable and social distanced Business Class product in the sky. Qsuite is available on flights to more than 40 destinations including Maldives, Riyadh and Singapore. It is the only airline to have been awarded the coveted ‘Skytrax Airline of the Year’ title, which is recognised as the pinnacle of excellence in the airline industry, five times.

A multiple award-winning airline, Qatar Airways was named ‘World’s Best Airline’ by the 2019 World Airline Awards, managed by international air transport rating organisation Skytrax. It was also named ‘Best Airline in the Middle East’, ‘World’s Best Business Class’ and ‘Best Business Class Seat’, in recognition of its ground-breaking Business Class experience, Qsuite. Qatar Airways is the only airline to have been awarded the coveted “Skytrax Airline of the Year” title, which is recognised as the pinnacle of excellence in the airline industry, five times.

Airports of The Maldives

Maldives, the most dispersed country on the planet with 1,192 islands spread over roughly 90,000 square kilometres, already has 13 airports, including four international airports. Honeymoon islands with white sandy beaches and beautiful blue lagoons surrounded by turquoise waters of the Indian Ocean pleasing to the eye already on the airplane board before landing at one of the airports of the Maldives.

Over a million tourists from across the globe visit the Indian Ocean island nation every year to holiday in one of the 120 resorts and 300 plus guesthouses located in all corners of the country. The multi-billion dollar tourism industry, which is the country’s main economic activity, relies heavily on the domestic transport infrastructure, especially air travel. Read More.