Here’s How S.A.L.T. program flows through the Silver Moon’s product — both onboard and ashore

When a cocktail with “a puffy dome” is placed in front of a cruise guest and he or she instinctively leans in to get a closer look, imagine the surprise when “presto,” the dome disintegrates and vanishes instantly. Everyone breaks into laughter. Suddenly, this isn’t simply a drink called “Selene, the Moon,” it’s entertainment.

On Silversea Cruises’ new 596-passenger Silver Moon, that drink is one option inspired by Greek history and served in the ship’s new S.A.L.T. Bar, one of several new spaces on this second Muse-class ship; a third ship in the series, Silver Dawn, will be delivered later this year.

Luxury Travel Advisor sailed on Silver Moon in August to get the scoop on what’s up with the new S.A.L.T. (Sea and Land Taste) culinary program, just introduced on the new ship, which is now sailing within Greece and soon to be cruising between Greece and Italy.

Created by Barbara Muckermann, the line’s chief commercial officer, and culinary journalist Adam Sachs, director of S.A.L.T. and former editor-in-chief of Saveur, it focuses on immersing guests in the food-and-beverage tastes and culinary traditions of not only the region of sailing, but in many cases, a specific port visited by Silver Moon that day. 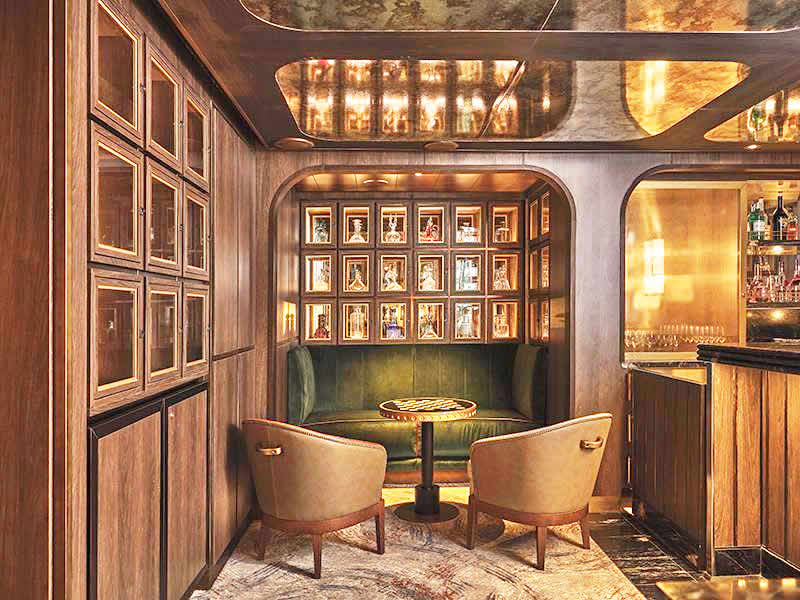 Located on Deck 4, this intimate new bar is adjacent to Kaiseki, the ship’s Japanese restaurant, as well as the new S.A.L.T. Kitchen and S.A.L.T. Lab. La Dame, the ship’s fine dining specialty restaurant, is now on Silver Moon’s Deck 8, and has been enlarged to 66 seats.

Another choice on the newly created bar menu is “From the Flames,” a smoky, spicy and sour concoction of Kilchoman Machir Bay Whisky, oak-smoked vodka, ginger, fresh lime and orange aromatics; this new drink is designed to reflect Santorini and its volcanic eruption 3,000 years ago, which formed the beautifully rugged landscape people see today.

Many drinks in S.A.L.T. Bar use spirits from the region of sailing. For example, a Mataroa Pink Mediterranean Gin drink uses premium gin from the Melissanidis Distillery in Macedonia, northern Greece.

One exceptionally pretty non-alcoholic drink is “Fork in the Road,” a bittersweet, sparkling concoction created with Aecorn bitter aperitif, apricot jam, orange juice, fresh lemon and alcohol-free Proseco. It’s inspired by an eastern Mediterranean tale that harkens back to the wedding of a Byzantine princess and Venice’s Doge, when the bride used her own golden fork (a Byzantine invention) to dine, appalling the Venetians who considered it blasphemous not to eat with one’s hands. 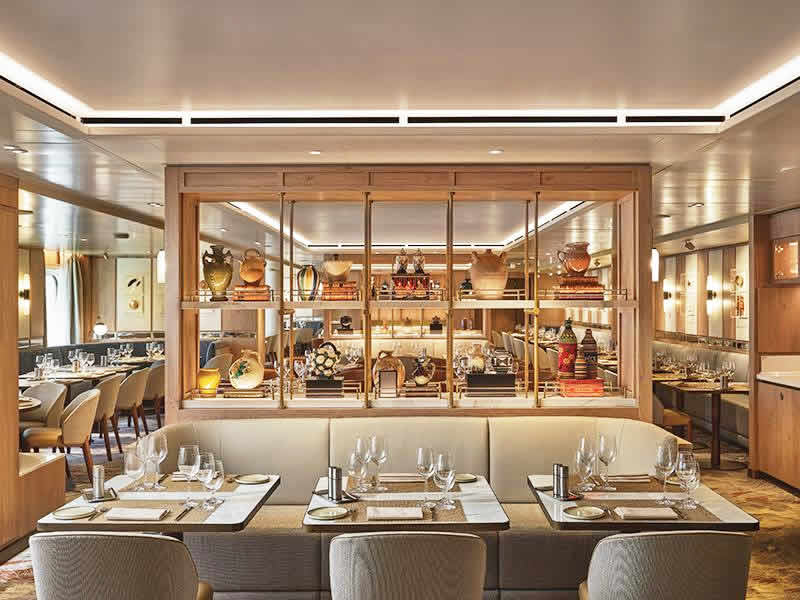 After enjoying evening drinks in the S.A.L.T. Bar, guests often head for S.A.L.T. Kitchen, a new dining venue (no reservations required) located in the same area of Deck 4. Its menu is split into two sections, a “Voyage Menu” with food tastes from the region of sailing, in our case, the eastern Mediterranean, and an even-more-specific “Terrain Menu” offering dishes from the port of call visited that day, such as the island of Patmos or Cyprus.

While it’s more Bourdain than Michelin in concept, we found the dishes both authentic and appealing in taste and presentation. During the port day in Syros, Luxury Travel Advisor dined in the evening with Roberto Martinoli, Silversea’s president and CEO, at S.A.L.T. Kitchen. That port day’s Terrain Menu offered multiple starters, among them “Flavors of Syros,” comprising San Michali, a firm, cow’s cheese unique to the island, and Aetopita, a fisherman’s flatbread topped with marinated swordfish, fennel, tomato and Greek olive oil.

We ordered a starter from the Voyage Menu, the “Astakomakaronada,” a home-made pasta popular across the eastern Mediterranean. We’d recommend this dish that combined Aegean lobster with fresh tomato, fennel, thyme and a splash of brandy. It was tasty and cooked to perfection.

Digging down deeper into the local cuisine, for an entrée, we switched to the Terrain Menu and savored the “Syros Loukanika,” traditional local sausages served with roasted potatoes and braised fennel. Why did we order that? It wasn’t our first choice, but we were swayed by guests who went ashore and returned talking about how their guide raved about the island’s fabulous sausages. So, we had to try them. It was a way to dive deeper into the Syros experience, which is the whole point of S.A.L.T.

And for dessert, highly recommended among the tasty sweets on the Terrain Menu is “Halvadopita,” a popular Syros treat consisting of almond nougat sandwiched between sweet wafers and served with frozen orange yogurt. Let’s just say it was delicious.

Luxury travel advisor Tom Baker, president and partner, CruiseCenter in Houston, TX, also sailed on Silver Moon this summer, and he dined at S.A.L.T. Kitchen during a sea day/Turkey port day. He enjoyed the same appetizer, “Astakomakaronada,” as we did, but instead chose the fresh local fish of the day, sea bass.

Silversea offers many enrichment programs (some S.A.L.T. focused, others not) in Silver Moon’s Venetian Lounge. On our recent Greece cruise, the S.A.L.T. talks presented for guests in the ship’s Venetian Lounge were “Greek Spirits,” “Cuisine of Greece and Turkey,” “Sea Change: A Modern Approach to Cocktails,” and “Beyond Borders: The Food of Cyprus.”

On Deck 4, the new S.A.L.T. Lab is Silver Moon’s high-tech, culinary space with cooking stations for hands-on classes. For example, class options during our cruise included “The Wild Isle: Why the Food of Crete is the Best in Greece,” “How to Mezze” and a deliciously appealing “Cook the Menu: Moussaka.”

Silversea has also extended the S.A.L.T. concept ashore. Among the new S.A.L.T. Ashore excursions in Greece is “Tastes of the Cyclades: Food & Flavors of the Beautiful Islands” during the port day in Paros, which among the activities, includes a fun phyllo-making session. Another S.A.L.T. Ashore excursion in Limassol, Cyprus, is the “History of Wine in Cyprus with Florentia Kythreotou,” a renowned wine expert.

In Heraklion, Greece, S.A.L.T. Ashore offers the robust “Heart and Soul of Greek Cooking: A Cretan Culinary Adventure at an Exceptional Organic Farm.” This unfolds on a remote hillside setting with mountain views. The private organic farm Peskesi welcomes Silver Moon’s guests to experience the pleasures of the Cretan table on a full-day immersive S.A.L.T. experience.

Cruisers will walk with the owners around the farm, learn about sustainable farming practices and pick and taste some of the ancient varieties of products grown in local fields. They’ll also taste and view local olive oils and wine and join around a wood-fired hearth to learn about cooking Cretan diet staples. For example, lamb antikristo and stuffed zucchini blossoms and grape leaves are among the delicacies cooked at this hearth. 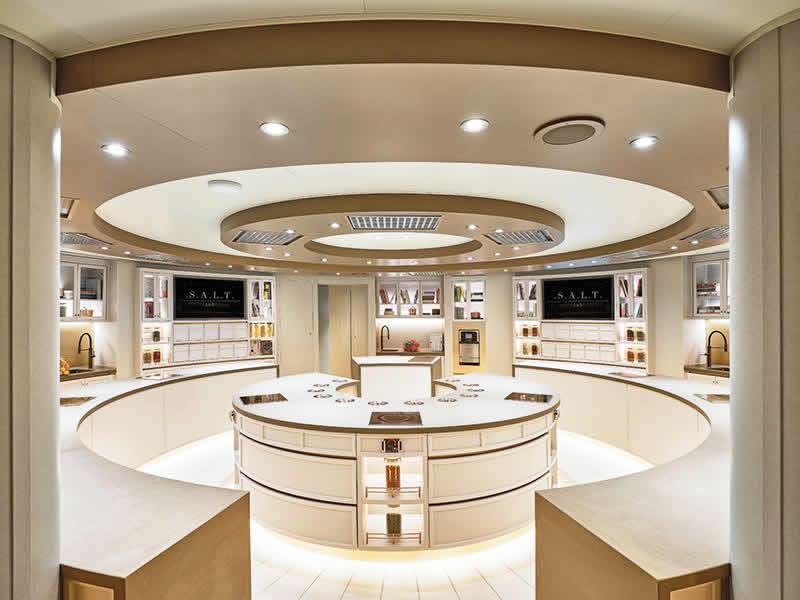 `The S.A.L.T. Lab is a high-tech, culinary space with cooking stations for hands-on classes.

If traveling with a friend, another couple or other family members, we’d consider the two-bedroom Owner’s Suite configuration; it has an additional sitting area, second bedroom, additional marbled bathroom with a shower, plus an additional large picture window. Guests in Owner’s Suites are pampered with butler service, complimentary laundry, pressing and wet cleaning, unlimited premium Wi-Fi, a pillow menu, daily canape service and more. 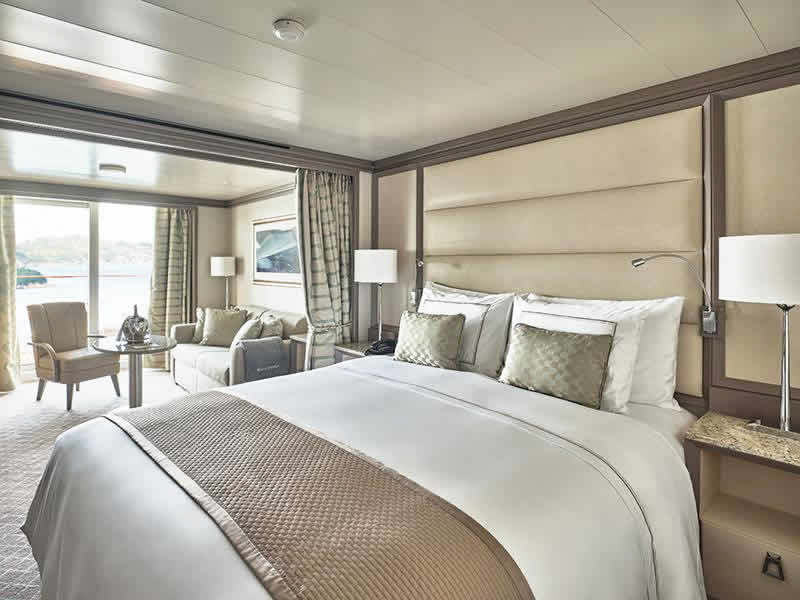 Suites on Silver Moon have ocean views and many offer a veranda.

Many cruisers likely will sail to check out Silversea’s new S.A.L.T. concept - now on Silver Moon and to debut later this year on Silver Dawn. Silversea believes the program will be an ultra-luxury differentiator and that at least 10 percent of all guests (particularly, die-hard foodies) will desire to do most or all the S.A.L.T. activities.

But the line also tells us that it expects almost all guests to try one or more of the S.A.L.T. experiences, whether dining in the new restaurant, attending a S.A.L.T. lecture, taking the new shore options, or simply ordering a “Selene, The Moon” in S.A.L.T. Bar and chuckling as the top of that drink vanishes in front of them.