This week a least four different cruise lines—Celebrity Cruises, Holland America Line, Royal Caribbean International and Seabourn—noting how they broke booking records in November. The first three each reported that Black Friday was the single largest booking day in the lines’ histories, while Seabourn said the entire month was its best ever.

Anecdotally, so it’s good to hear that the industry, which was arguably hit the hardest as a result of the COVID-19 pandemic, is bouncing back seemingly stronger than ever.

On a similar front, The Port of Québec announced a successful post-pandemic return to service, welcoming over 92,000 cruise passengers during the 2022 season. In addition to receiving maiden calls from eight different ships, the destination also debuted its new Terminal 30, which has the ability to accommodate large ships and over 2,500 passengers at a time.

In more good news from the industry, Japan is set to welcome cruise ships back to its ports in 2023, the country announced. Subsequently, Holland America Line said that Westerdam is preparing for a series of itineraries. Sailing roundtrip from Yokohama, Singapore, or between Yokohama and Singapore, cruises span 11 to 14 days and can be combined to form non-repeating “Collectors’ Voyages.”

Also in the cruise world—to an extent—is the possibility that Royal Caribbean joins the likes of Virgin Galactic, SpaceX, Space Perspective and others—as it aims to bring travelers to the “final frontier.” As posted on Twitter by Nick Weir, senior vice president, entertainment, Royal Caribbean, the company has been working on a spaceship titled Orbiter of the Galaxies along with the tagline, “The Next Royal Caribbean Adventure.”

That said, not all news is positive. Following an incident in which 800 people onboard Majestic Princess contracted COVID, resulting in the ship having to dock in Sydney, Australia, to separate guests and get them home, the line—according to USA Today—had to again miss a scheduled port call (also in Australia) due “slightly elevated” COVID cases. Princess canceled Grand Princess’ stop in Newcastle following advice from New South Wales health officials. According to The New York Times, COVID cases globally have gone up 31 percent over the last two weeks. That said, there are fewer than one deaths per 100,000 people over that same span. In essence: If you travel, continue to do so safely.

On the Hotel Front 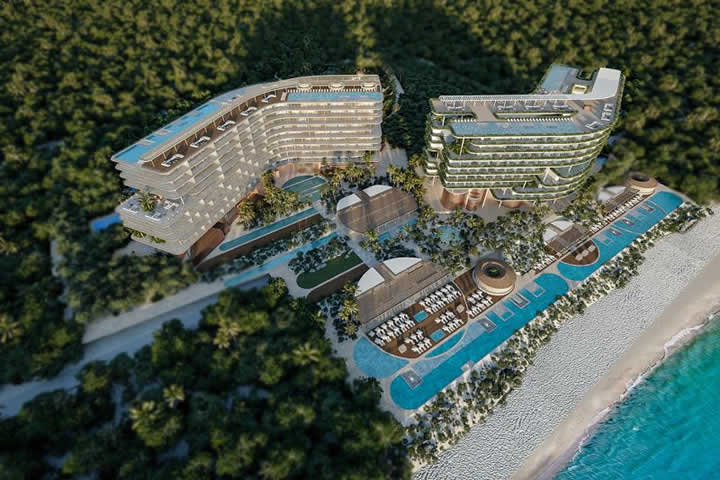 Consolidation continues within the industry with the news that Hyatt Hotel Corporation is acquiring Dream Hotel Group, including its Dream Hotels, The Chatwal Hotels and Unscripted Hotels brands. This acquisition includes 12 managed or franchised lifestyle hotels, with the possibility to bring on another 24 hotels expected to open in the future. It’s at least the fourth major acquisition/collaboration agreement made by Hyatt in the last five years.

In Mexico, Marriott International will be opening three new luxury all-inclusive hotels across its Luxury Collection (on Isla Mujeres), W and JW Marriott brands (the latter two being co-located in Costa Mujeres). The hotels are expected to open in 2024 and 2026, respectively.

Nearby, UNICO broke ground on its second hotel—this one located in Montego Bay, Jamaica. UNICO 18°77° Hotel Montego Bay will have 451 rooms—all of which offering direct ocean views—and either swim-up pools or hydro spa tubs, based on the category.

With the United States holding its midterm elections this past November, the American Society of Travel Advisors (ASTA) detailed how the shakeup could affect the travel industry. In short, things that were previously unlikely to be passed, remain so, while others that were more likely to be put into regulation… also remain so. Several proposed rulemakings are still awaiting comments, and ASTA is continuing to make its case for the benefit of agencies and advisors.

As for trends, Expedia Group says 2023 will be defined by its “no-normal” approach by travelers—meaning, there’s no “one-size-fits-all” when it comes to what they’re looking for. That said, among the top interests are trips to culture capitals, wellness retreats and outdoor destinations beyond beaches and mountains.

Hotelbeds, on the other hand, is expecting technology to play a big role in travel in 2023. Travelers want a “frictionless” experience—aka being able to book everything all at once. While it’s inferred Hotelbeds was referring to OTAs, which can offer airline tickets, hotel accommodations, tours, etc., it can also mean that travel advisors have the chance to show how easy travel can be when it’s booked through them. Fintech and hotel digitization are also expected to become more commonplace.

It also points out that people are adding “tourism” to the ways in which they are thinking sustainably. The good news: Recent data from the World Travel & Tourism Council (WTTC) found that travel and tourism’s economic growth is decoupling from its greenhouse gas emissions. The proof: Between 2010 and 2019, travel and tourism’s GDP has grown on average 4.3 percent, annually while its environmental footprint has only increased by 2.4 percent.

Since 2001, we've helped our customers find the perfect cruise packages and book dream cruise vacations for less. We are a cruise finder and booking website committed to helping you research all your cruise travel options to find a cruise that fits what you're looking for. After you find a cruise the perfect cruise, make your reservation with our cutting-edge booking engine. We are the best site to book a cruise with because we are driven by our passion for cruise ship travel. Book a cruise today and enjoy the excitement of cruising the world with us!