Emerald Maldives Resort & Spa has added Russian cuisine to the it's menu. With even broader multi-ethnic and multi sensory experience, Russian dishes from chef Nikita Martynov are now serving at resort's restaurants.

Emerald Maldives Resort & Spa is a deluxe all-inclusive resort that gives guests the chance of trying out different types of cuisines all different from each other: from the more Mediterranean offering a selection of fresh fish, seafood, meat and vegetables cooked on a stone grill, pizza & pasta station at the Beach Club Grill, to the Asian cuisine atLe Asiatique, including the Teppanyaki grill, to the Central and South American flavors, with the Brazilian beef served from the skewers at the Amazònico. Lastly, Aqua Restaurant offers a mix of different cooking stations individually dedicated to the most celebrated international cuisines, from Mediterranean toJapanese, Italian, Chinese and Vegetarian.

Moreover, Emerald Maldives Resort & Spa restaurants will have a new addition to its menus thanks to Chef Nikita Martynov, that took off and landed on Maldivian soil to enrich and introduce toEmerald Maldives, a broader multi-ethnical and multi sensorial experience with the typical Russian dishes.

Working as Executive Chef for 10 years, ChefNikita Martynov experience started in Syktyvkar, Russia and continued in Moscow where he currently lives. His hotel experience began in Sochi during WorldWinter Olympics of 2014 and then by working for Grand Hotel Krasnaya Polyana, a 5 star hotel that gave him several opportunities as the one of being the private chef of Prince Albert of Monaco and former Italian Prime Minister Silvio Berlusconi.

He currently works at the Russian restaurant Chekhov, situated inside one of the most famous Russian theaters called MXAT in Moscow, that has been awarded as the “Best Theatre Restaurant” at the Royal Russian Awards.Furthermore, Chef Nikita Martynov reached the second place during the culinary competition held by Cognac Roullet’s company (Russia, November 2019) and, during the Football World Championship (Russia, Summer 2018) he was catering all VIP international delegates. In addition, Russian cuisine is super delicious and different from others. It is made up of a combination of fish, pork, poultry, caviar, mushrooms, berries and honey.  Crops of rye, wheat, barley and millet are usually used for the preparation of bread, pancakes, pies, cereals, beer and vodka. Some common Russian specialties are soups that can be both hot and cold, salads with potatoes as one of the main ingredients, porridge and then a variety of meats, fish and vegetables. Meat is usually used in three different ways: either boiled and then used in soups or porridge, baked in pots together with cereals or, jellied using a gelatin base and then left to marinade to then be served in a large serving bowl also called “Miska” or “Goo Bowl”. Desserts are also present and are perfect for sweet tooth as they are considerably sweet. They usually seen accompanied with jam or have an alcoholic beverage as an ingredient to spice things up and add flavor to it.

Chef Nikita Martynov stayed at Emerald Maldives Resort & Spa, with the scope of training the staff and improve Chef Aldo’s knowledge about Russian native dishes. During his one-week stay (05th – 12th of October 2020), he studied and designed a Russian menu to display on both Aqua and Beach Grill restaurants.
The resort main scope with this initiative is to offer guests the possibility of enlarging their gustatory stay in a Deluxe All-Inclusive resort to 360° culinary experience and for them to absorb the essence of the Russian culture also if at the Maldives.
Additionally, to prove the success of this training, during Chef Nikita Martynov stay, the resort organized a 6-course special chargeable Russian dinner, directly on the main beach, in which every dish was paired up with high quality wines and champagnes. The wine/champagne selection was done by the Head Sommelier and Di vine wine cellars Company based in Maldives. The combination of cultures and the blending of aromas awakened all 5 senses making this a very special and unique experience. 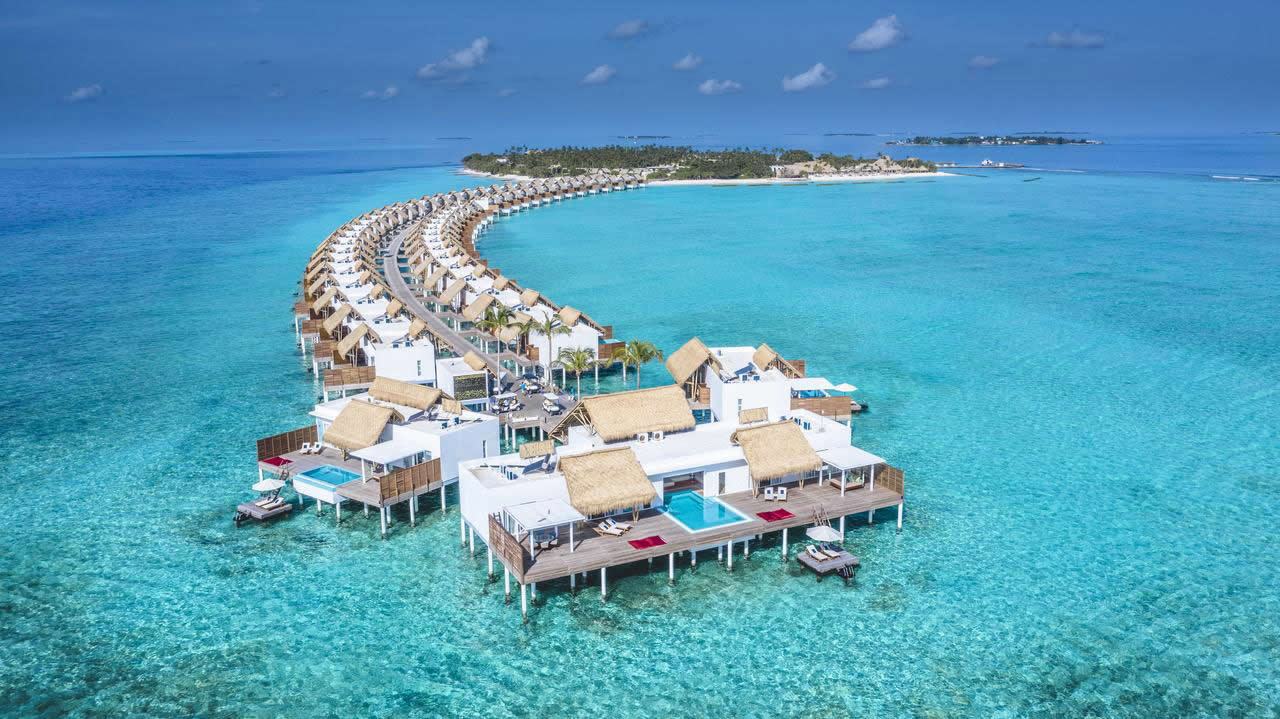 Emerald Maldives Resort and Spa - Deluxe All Inclusive is an unforgettable getaway for people who dream to beach experience the beautiful white sands, tropical nature and blue ocean of a Maldivian island, with luxurious ambience. All inclusive 5-stars Deluxe Resort is located in Raa Atoll and was opened on August 2019. Emerald Maldives is the perfect destination for your holiday in the Maldives, whether you are looking for adventure, exploring the underwater wonders, or simply relaxation, enjoying the modern facilities, in-house dining venues and comfort of your villa. The Emerald keeps everything it promises. Just outstanding work - from the incredibly luxurious villa, to the great food, to the incomparable excellence of all services. Managed by Rome-headquartered hotel chain Emerald Collection, Emerald Maldives Resort and Spa is set on the island of Fasmendhoo which is accessible by a scenic 45-minute seaplane flight or a 30-minute domestic flight from the main Malé International Airport. Read Full Review...