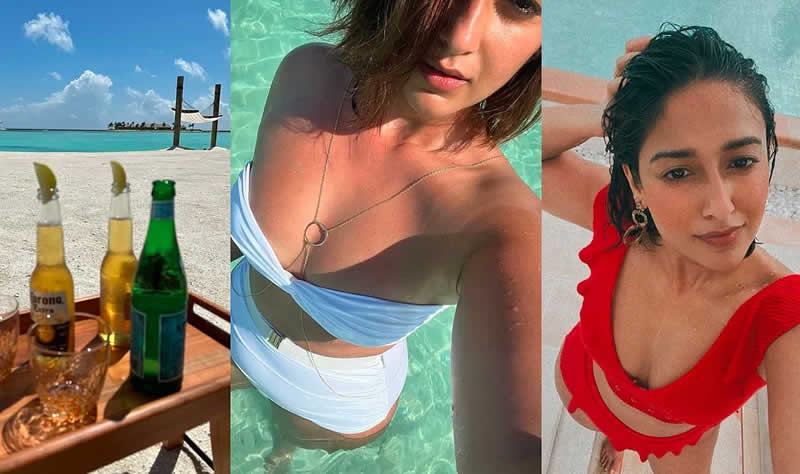 Ileana D’Cruz is indulging in some "me time" as she enjoys an exotic vacation at Kuda Villingili Resort Maldives.

An Indian actress and model, Ileana posted a series of pictures on her Instagram, where she is seen flaunting her svelte figure in stunning set of bikinis.

The beach destination has become a favourite spot for holidays for celebrities. The actress recently jetted off to the island nation and has been sharing sensational pictures and videos on her social media. In one of the posts, she was seen enjoying a dip in the sea in an off

In one of the posts, she was seen enjoying a dip in the sea in an off-shoulder white bikini. "Sun & the sea all to myself," she captioned the sun-kissed picture.

Ileana D’Cruz is a beach babe and shared another photo from the Maldives. While basking in the sun, she surely looked stunning in red bikini.

Ileana D'Cruz is a water baby at heart. The actress loves her beach days and her Instagram timeline is proof. Now, she is busy soaking up some “vitamin sea”. Ileana also asked her Instagram family if anyone wants to join her. She wrote, “Vitamin sea, anyone?”

Ileana's latest release was the digital film "The Big Bull" starring Abhishek Bachchan. The film was loosely based on the securities scam of 1992.

She will next be seen in "Unfair N Lovely”; a comic take on India's obsession with fair skin. The film is set against the backdrop of Haryana and features Ileana opposite Randeep Hooda.

About resort: The newest five-star luxury property located in the North Male Atoll, Kuda Villingili is the Maldives redefined; with its fine beaches shaped like the half-moon, the resort offers a unique, experience-driven concept, home to an impressive line-up of gourmet dining options, an idyllic beachfront spa, and an azure, spacious 150m pool, encircled by stylish sunbeds, cabanas, and bars.