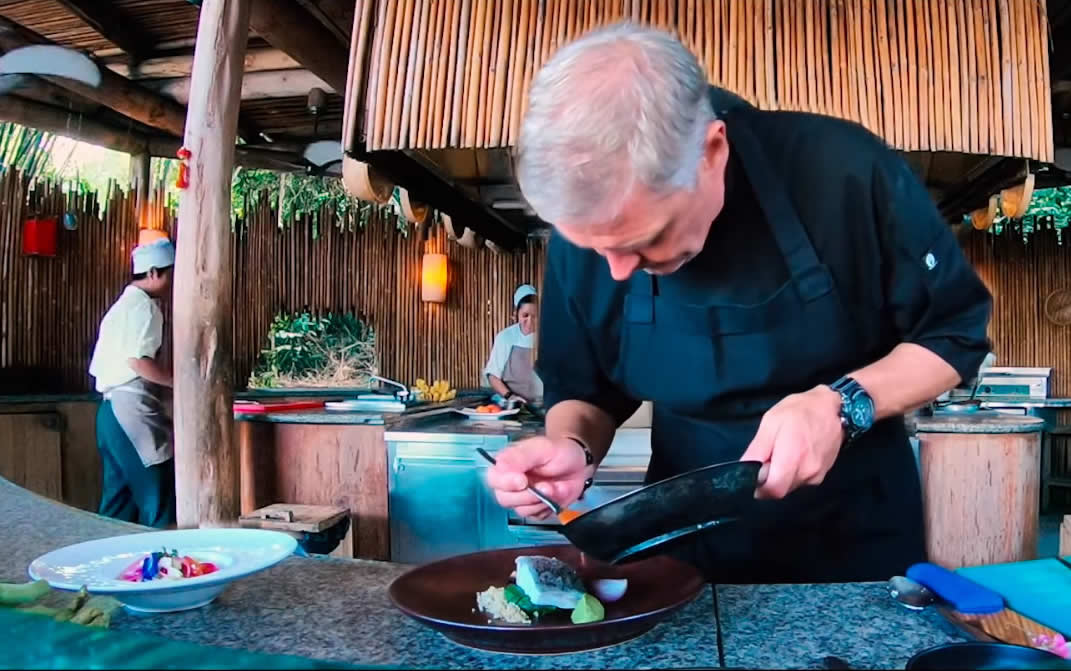 Soneva has announced plans to welcome a host of renowned Michelin-starred guest chefs and visiting experts from the worlds of sport and wellness at Soneva Fushi and Soneva Jani in Maldives.

The incredible line-up for October is part of the Festival of Colour – a two-year campaign across Soneva’s resorts which celebrates the diverse array of guest experiences on offer.

An exquisite opportunity to experience the culinary prowess of some of the world’s most talented chefs, during October every dining venue across both Soneva Fushi and Soneva Jani will host a Michelin-starred chef for at least one evening. Guests at Soneva Fushi will also be able to delight their taste buds with a Michelin-starred food journey across the island, and watch in awe as award-winning chefs go head-to-head in a Michelin-starred cooking competition.

One of Asia’s most acclaimed chefs, Julien Royer, will be gracing Soneva Fushi’s Once Upon a Table between October 16 and 23.

The two-starred Michelin chef is co-owner of Odette at the Singapore National Gallery – named after Royer’s grandmother, it was recently crowned the Best Restaurant in Asia for its modern French cuisine focusing on seasonality, terroir and the finest artisanal produce sourced from across the globe.

The self-taught French master chef made his name through his family-run restaurant La Bouitte in the French Alps – which he has helped transform into a sophisticated gourmet destination, one of just 26 three-starred restaurants in the prestigious Michelin Guide.

The third French chef on October’s Festival of Colour line-up is Gregoire Berger. Ranked number 10 in the Best Chef in the World Awards 2017, guests will have the opportunity to experience Berger’s award-winning cuisine at Soneva Fushi between October 19 and 28.

Originally from Brittany, Berger honed his culinary skills in some of the world’s top kitchens, including France’s Le Pressoir, Le Domaine de Rochevilaine and La Grande Cascade, and today he heads the Ossiano underwater restaurant at Atlantis the Palm in Dubai.

Italian chef Giancarlo Perbellini, who is the president of the prestigious culinary competition Italian Commission of the Bocuse d’Or, will be bringing his pioneering culinary vision to Soneva Fushi between October 22 and 30.

Perbellini made his mark by blending cutting edge culinary innovation with traditions inspired by Italy’s rural heritage. The multi-garlanded chef was awarded his first Michelin star in 1996, whilst most recently his concept restaurant, Casa Perbellini, was awarded two stars by the Michelin Guide in 2016, with another star going to his other venture, the Dopolavoro Dining Room – an unprecedented double achievement in Perbellini’s Italian homeland.

From culinary masters to the world of sport, Soneva Fushi is set to host Jason Robinson, who is considered a living legend by both Rugby Union and Rugby League enthusiasts, from October 18 and November 3.

Robinson is famed for his trademark sidestep, devastating acceleration and daring manoeuvres that made him a crowd favourite during his time on the pitch. As a Rugby Union player, he won 51 international caps for England, as well as multiple titles for his club Wigan, including the World Club Challenge and Regal Trophy. In 2000, he switched codes to Rugby League to join the Sale Sharks as well as England’s national team and the British Lions, scoring 30 tries across 56 international matches, and captaining the England squad in the 2005 and 2007 Six Nations campaigns.

Former WTA tennis player Daniela Hantuchová will be at Soneva Fushi between October 18 and 27.

Visiting practitioner Sandra Laznik will be hosting sessions at Soneva Jani between October 1 and 25.

The international wellness consultant is known for mixing science with the esoteric, and has a roster of private clients across the world. A professor of sport education, she is also trained in classical and sports massage, is a qualified Sun Power Yoga and Pilates teacher, and is a Universal Tao Healing Arts facilitator for Sacred Femininity Courses. Best Experience:   Overwater Villas, for family, for couples, the most exclusive Resort of Maldives

Soneva Jani is like someone with personal magnetism, someone who knows themself, knows the world and greets it with a big, welcoming smile. This resort doesn't just have character, it has charisma. The perfect combination of luxury and nature, Soneva Jani offers guests an unparalleled experience in idyllic surroundings. Inspired by the word, which means wisdom in sanskrit, Soneva Jani is Medufaru island, which is part of an uninhabited cluster of five islands in the Nunu atoll. The most exclusive luxury hotel in Maldives and the most prestigious for many hotel brand in the world is surrounded by pristine beaches covered with lush tropical greenery and a turquoise lagoon with crystal clear water and unbeatable views of the 360 ​​° Indian Ocean. Today, Soneva Jani has 24 water villas and one beach villa, although at a later stage it is planned to build additional beach villas. Read Full Review... 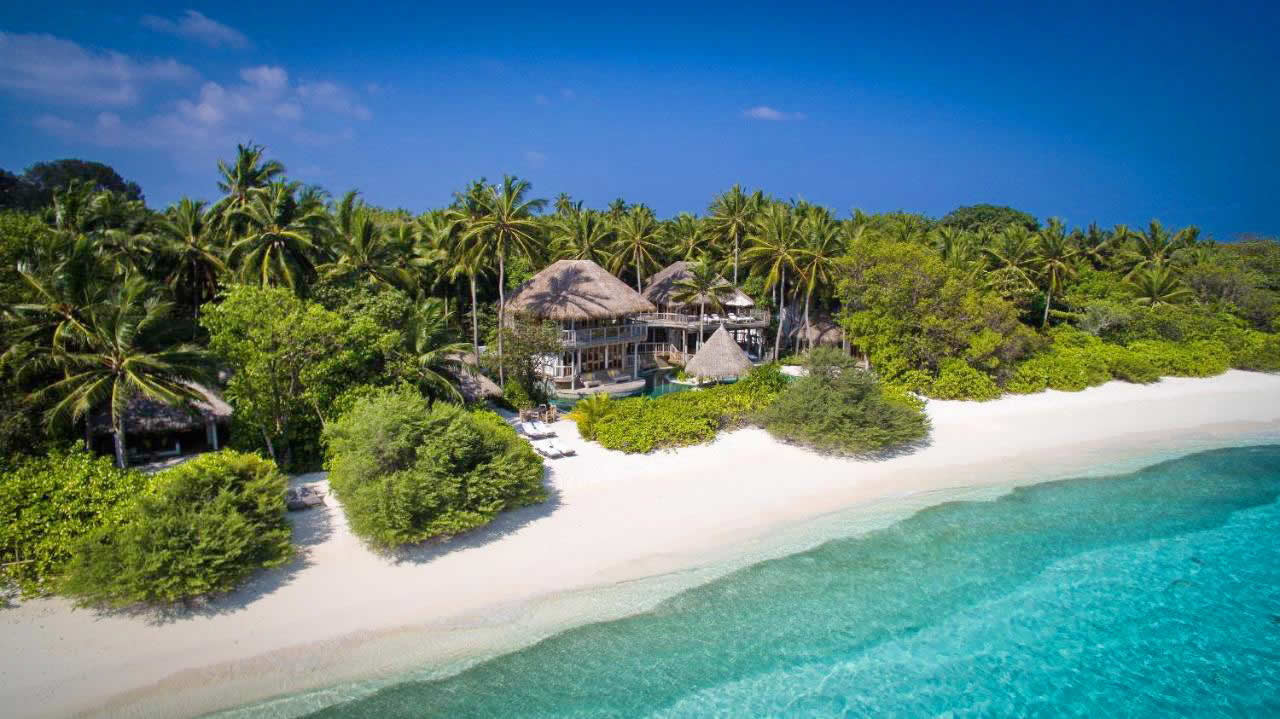 Awarded with white sandy beaches of a private island in Maldives, the Soneva Fushi's eco-chic villas are the material of the romantic fantasies of Robinson Crusoe. Drop your shoes and worries: with an luxury spa, hypnotic house reef and high quality butler services, you will not need anything on this laid-back playground of a beautiful uninhabited island. If Robinson Crusoe could develop hotels - he would have built Soneva Fushi! A total of 65 apartments and villas were implanted in the heart of lush vegetation to ensure maximum privacy for each ones, and most importantly, that it was not visible from the sea. 8 categories of rooms, each trying to outdo the elegance of a neighbor, start with a simple Rehendi from 182 m2 to a huge Jungle Reserve villa of 720 m2, passing by Crusoe villas, apartments or even a villa Soneva Fushi. Read Full Review...