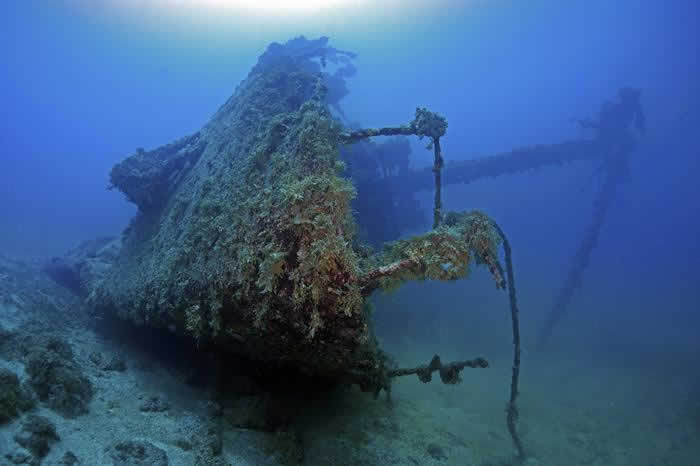 Scuba diving in and around a shipwreck is a unique experience, where human history combines with the natural world in a way seen in very few habitats. Wrecks form one of the few phenomenons where the introduction of a man-made structure into the surrounding natural environment can often increase the range and diversity of life in the area.

The biodiversity that can be supported by them is commonly world-class, attracting all manner of species, from the smallest of macro life to the giants of the sea. It's not unusual for several ships to be located within a small area, especially where many may have been sunk at the same time during raids as part of military campaigns - for example, World War Two. This gives an ideal opportunity for adventurous divers to explore many such wrecks over a period of a few days, for which a liveaboard dive trip lasting a number of nights can be perfect.

Over time, ships can become covered in life, so much so that to many they are known as artificial reefs, acting in the same role as the natural coral reef. As soon as a ship sinks, it's huge structure provides shelter for organisms, in an often desolate seabed surrounding, resulting in it becoming rapidly inhabited by many forms of marine life. The structures are often made of steel, which is extremely hard-wearing, giving an excellent foundation for larvae to grow, followed by soft corals that form a framework highly similar to natural reefs. This, in turn, attracts vast numbers of reef fish, joined by larger predators and pelagics. The result can be truly mesmerizing, and is the reason why numerous shipwrecks consistently feature in lists of the planet's greatest scuba diving sites.

Egypt and the Red Sea are an absolute mecca for scuba diving, and for good reason. There's everything that one could possibly ask for from a diving destination - warm weather, crystal clear water, protected marine reserves, efficient infrastructure, and of course a plethora of marine life. Some fabulous shipwrecks can be found here too, particularly in the Northern regions of the Red Sea. The SS Thistlegorm was sunk in 1941 before it was able to deliver its cargo to the British in North Africa and is now a war grave and underwater museum. The vessel is over 400 feet long and so often the best idea is to visit the site on a liveaboard that will allow divers to undertake several dives per day over longer period of time. You'll come across the likes of motorbikes, trucks, guns, and other cargo, combined with a huge array of resident marine life.

The site of Abu Nuhas, slightly south of Thistlegorm, features 4 famous wrecks accessible to divers, the Giannis D, Carnatic, Chrisoula K, and Kimon M. These offer several penetration opportunities and many swim-throughs, as well as the chance to view life such Lionfish, Triggerfish and Dolphins.

Emperor Superior offer wreck junkie divers the opportunity to dive the best of the northern Red Sea's wrecks on their 'Get Wrecked' itinerary. Leaving from Hurghada this trip will visit world-famous wrecks the Carnatic, Giannis D, Ulysses, Rosalie Moller, Dunraven and of course the Thistlegorm, along with countless other wrecks along the way.

For those that like to have a mix of dive experiences, Emperor Elite offers the 'Reefs and Wrecks' trip which gives divers the best of both worlds. Not only will you visit the famous wrecks of the north such as the Giannis D, Carnatic and Thistlegorm, you will also visit the stunning reefs of Shark and Yolanda at Ras Mohammed, and the Straits of Gubal. The perfect mix for reef and wreck lovers alike. 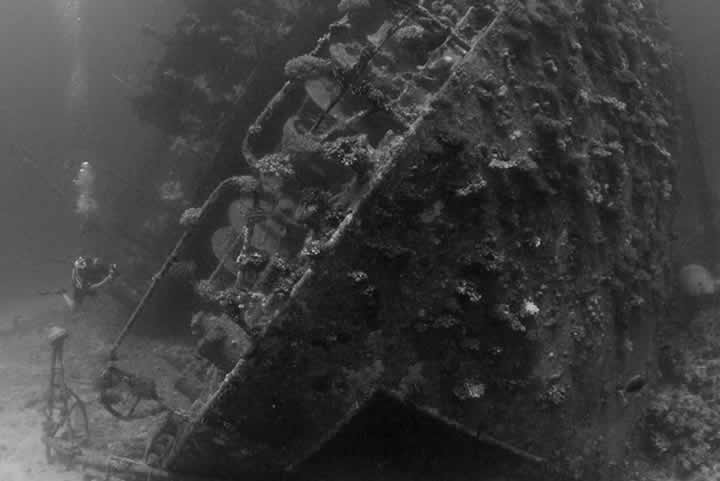 The stunning turquoise islands, cobalt blue lagoons, and a seemingly endless number of outstanding dive sites that form part of Micronesia in the Western Pacific ensure that this remote region is a favourite of many scuba divers. It's also a place featuring numerous Second World War wrecks, many of which can be dived whilst on a liveaboard dive tour.

The famous Iro Maru wreck is located in the Palau region of Micronesia. It's a large freighter that was sunk in 1944, and has since become the home to a vast array of marine life. Several structures such as guns and king posts can still be seen, with many forms of coral, macro life and reef fish covering the entire ship.

Liveaboard boats in Micronesia often spend some time at Chuuk (Truk) Lagoon, the site of several shipwrecks. There's some good variety here, with options for Tec divers and the less experienced. Fujikawa and Sankisan Maru are perhaps the most well known vessels here, featuring aeroplane fuselages and engines, ammo, and trucks, and the opportunity for divers to navigate through the various compartments still in tact within the structures. 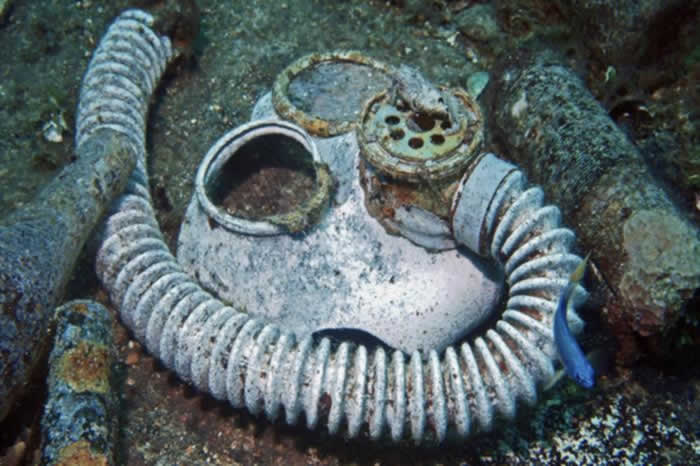 The Caribbean is full of spectacular scenery and marine reserves, with the Cayman Islands being up there with the very best. Two wrecks are of particular interest here, Kittiwake and Captain Keith Tibbetts. Kittiwake was a US submarine rescue vessel in service between 1946 to 1994 and was sunk in 2011 in Grand Cayman, and now serves as a fantastic artificial reef, great for exploring both inside and out.

Keith Tibbetts is a Russian ship, which was also purposefully sunk (in 1996) and as such is in great condition, and despite it's relative youth as an artificial wreck it is already home to hard corals and colourful sponges.

Consisting of over 7000 islands, the Philippines are blessed with amazing beaches, coastlines, and underwater action. Slightly less well known and also a little off the beaten track, is the region of Coron in the province of Palawan, which is home to a fleet of Japanese supply ships which were sunk in 1944, all dotted in around the 50 or so islands that make up the area. It's slowly becoming recognised as one of the best places in the world for wreck diving, showcasing a variety of vessel types, from small gunboats to huge seaplane tenders and tankers. Sailing from one wreck to another aboard a liveaboard will allow divers to witness the fabulous scenery and remote islands that make up this place, once a scene of one of World War Two's heaviest sea battles.

As its name suggests, 'Iron Bottom Sound' is the site of over 200 ships and 690 aircraft that lie on the seabed of Savo Sound in the Solomon Islands, which sank during the battle of Guadalcanal between 1942 and 1943. There are military relics from both the Japanese and Americans, including destroyers, minesweepers, submarines, troop carriers and planes, giving a massively diverse range of sites for the adventurous diver. Over the years the wrecks have been encrusted in the complete range of tropical corals, and if you are aboard a liveaboard dive boat it's likely that you'll see the likes of Manta Rays, Sharks, and schools of huge pelagics, as you'll be diving over a period of several days.

Wreck diving allows divers to encounter glimpses of the past, as well as some fabulous examples of marine life, with the biodiversity often reaching that of nearby natural coral reefs. They vary from small wrecks easy to navigate to steel mazes with complex corridors and hidden compartments. It’s worth thinking about doing a wreck diving qualification as sometimes operators will require divers to possess this should they want to swim through the structure - and often it’s within the main body of the wreck that the most interesting features can be found. If however, you’d rather not penetrate, it’s still a fantastic experience to swim around the outside of most wrecks, witnessing the way it has become home to huge numbers of animals and an often astounding array of marine creatures. 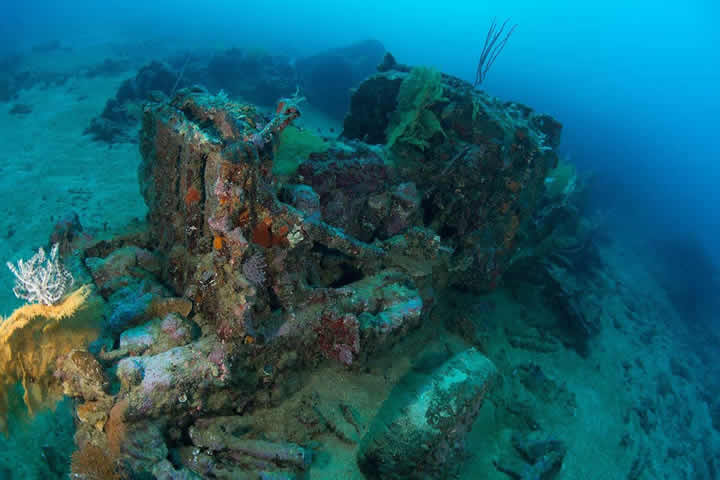 Diving in Addu atoll, the most southern waters of the Maldives is a special experience that stands out from your common scuba adventures. Manta Rays can be seen the year round and the biggest shipwreck in the Maldives, The British Loyalty Wreck is a 25-minutes away by boat.