Diving in Addu atoll, the most southern waters of the Maldives is a special experience that stands out from your common scuba adventures. Manta Rays can be seen the year round and the biggest shipwreck in the Maldives, The British Loyalty Wreck is a 25-minutes away by boat.

Blessed by the dive sites with the best hard corals, Addu Atoll is the best place for scuba diving with giant manta rays and more pelagic species in Maldives. From exhilarating shark encounters and thrilling drift dives to beautiful coral gardens and wreck dives - the Addu Atoll tick all boxes on a diver's bucket list.

Covering the island nation over the equator and into the Southern hemisphere of the Indian ocean, Addu Atoll is the main economic and administrative center in the south of Maldives rivaling Male in importance and magnitude. The second international airport in the Maldives located on Gan Island and the luxurious resort of Shangri-La's Villingili Resort and Spa play an important role in the development of the tourism industry of the Maldives.

Scuba diving in the far southern Maldives is great all year round, but the best time to go from January to April with warmer waters temperatures and calm seas. Expect a fantastic holiday for divers and non-divers alike.

Addu Atoll has atropical, humid and hot climate year-round. Water temperatures change between 27°C and 31°C throughout the seasons. The warmest water temperatures are between January and March. From May the monsoons come, and June - August are the wettest months. September to November has reduced visibility, but more filter feeders as mantas and whale sharks.

Though there are distinct dry and wet seasons, visitors should be prepared for rain at any time of the year - tropical often means unpredictable! However, diving is still great, and dive operators usually know which dive sites are sheltered from the weather.

The dry season is from November to April, that coincides with the main tourist season - so be sure to book in advance.

If you are flexible with your travel dates, then We do advise you to come to Addu during full or new moon, when the atoll is washed by stronger currents which will bring more big fish. 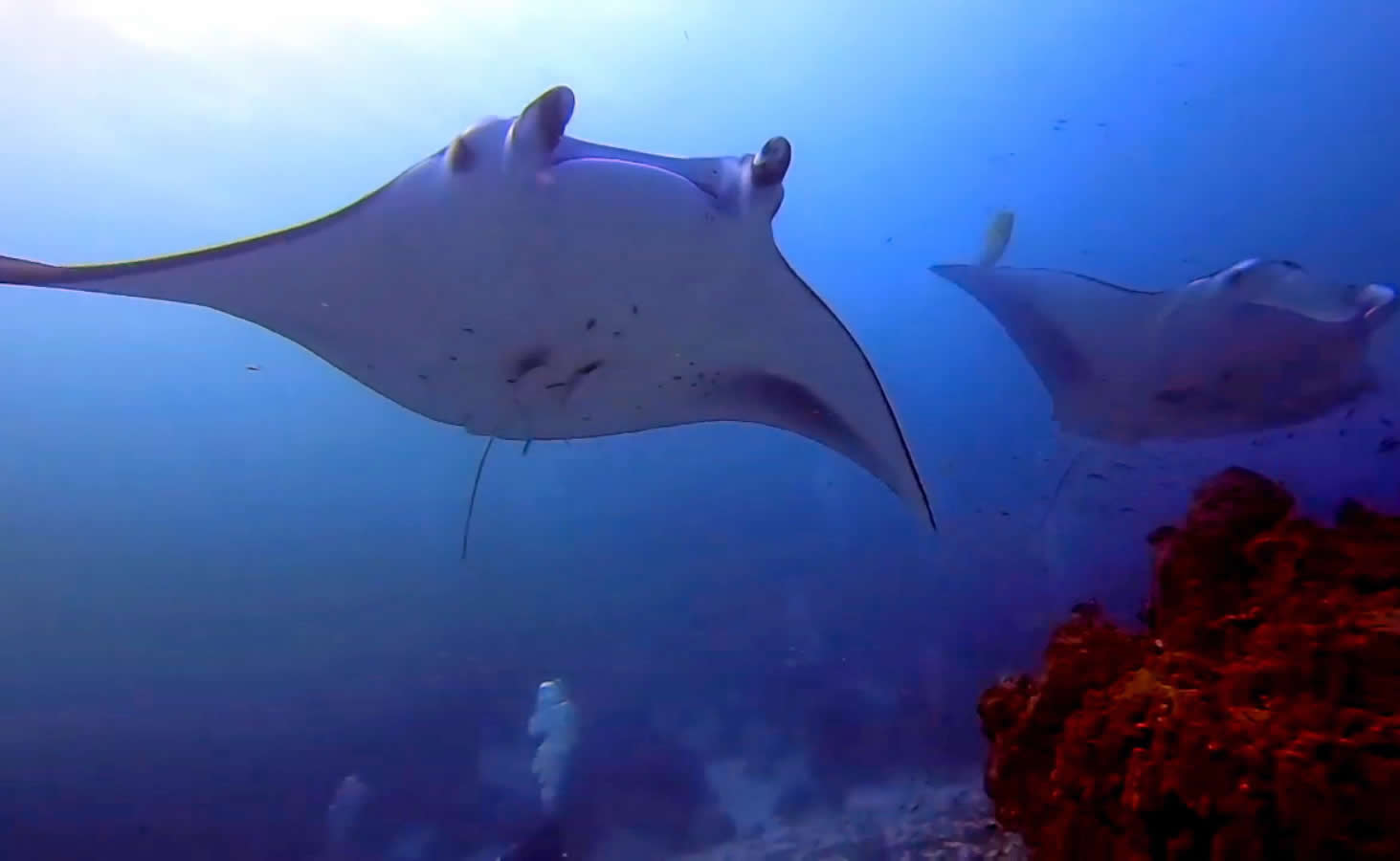 The Addu's warm, clear, waters is home to an abundant marine life, and there is no better place in the Maldives to be wowed by the majesty of large ocean life than diving in the southern atolls.

Addu atoll has built up a reputation of hosting some of the best spots to dive with Mantas in the Maldives (with 12 months a year). Shark and dolphin encounters are pretty much guaranteed and the shallows are buzzing with turtles and reef fish, such as parrotfish, sweetlips and snappers.

The reefscapes of Addu atoll is no doubt one of the most impressive in the Maldives. The underwater walls, candus and thilas are overgrown with lush coral of all shapes and sizes from fragile red gorgonians to the solid brownish branched of elkhorn coral and boulder-like brain coral.

While there is plenty of luxury resort-based diving mostly from 'dhoni' boats Maldives is also the perfect destination to explore by liveaboard. The world-class standards are high in the well-developed diving industry with top class guides and quality rental equipment.

Liveaboards to Addu Atoll, previously known as Seenu Atoll, catering specifically to these southern waters are available on Liveaboard.com. Expect 3 action packed dives per day swimming with whalesharks, hammerheads and Mantas. Topside, there is plenty of room for relaxation and discussing your underwater adventures with other divers over delicious family-style meals and drinks. Read More

The Most Popular Dive Sites

Whether you're a novice or pro, diving in the Addu Atoll caters to every individual’s needs and desires. Diving in the southern Maldives includes an array of dive sites with many unique features from ship-wrecks to drift dives and reef dives. Another massive highlights are the 'kandus' - encounters different kind of sharks, eagle rays, dogtooth tunas and manta rays. A lot of the best dive sites are full-on drifts and you need good buoyancy skills to experience their aquatic beauty.

The British Loyalty is a must-dive wreck for scuba divers in the Maldives. Built in 1928, British Loyalty was sunk during WWII on March, 1944. The largest wreck in the country at 140 meters in length, now the British Loyalty ship lies 33 metres under water between the islands Maradhoo and Hithadhoo. The site is easily accessible by boat, as it is less than 25 minutes away even from Gan. On clear days, a portion of the starboard side can still be seen from the surface of the water. The ship is covered with hard and soft corals that are home to a large number of fishes. Divers stop at the 'British Loyalty' year-round for shark, turtle, and large fish encounters. At times, divers also find manta rays and sharks around the Loyalty ship.

If you love the ocean - diving alongside sea turtles is surely on your bucket list. Thanks toMaldives' large sea turtle population, Turtle Point is one of the most well-known jumping-off site in Addu atoll, where you can get up-close and personal and learn more about with these graceful and friendly creatures.

Turtle Point is home to Hawksbill and green sea turtles are regularly seen here, so keep your underwater camera ready to capture their aquatic beauty.

With the depths from 15 m to 30m and strong currents,this famous Manta Ray cleaning station is located in the Maa Kan’du. Here, there is a great chance to spot Reef Mantas when diving on most days, usually in the morning when the current is on its way in. In a strong current use a reefhook to stay in place and watch the mantas. The beginning of the drift dive is also interesting with sparse coverage of coral and a there is the possibility of spotting reef sharks and eagle rays.

Located on the northeast tip of Addu Atoll on the outside of Hulhumeedhoo, "Shark Hotel" is a home for the 15 to 20 grey reef sharks that you can dive with here at any given time. If you are looking for a truly exhilarating experience shark diving in Maldives, this spectacular site is must go.

The outside reef drops from five to 30 meters to a sandy plateau that is about 30 meters wide. On this sand is the ‘shark hotel,’ where as many as 15 white tip sharks and five grey reef sharks can be seen at any one time. On the outside of the plateau, the reef drops to more than 60 meters and then the visibility is good, big sharks are seen swimming in the depths below.

Located in the channel on the corner of Kuda Kandu, this is one of the best in Addu atoll! Only one small patch of rubble interrupts massive coral formations of table, mushroom, brain, cone and many other corals along a steep slope to 25m.

The 'kandu' itself features a sandy slope with coral blocks from 8-22m. Usually more schooling fish than anywhere else and many grey reef sharks in the channel mouth.

A must diving site! An exciting drift dive the 'Maakandu Channel' offers adventure for current junkies and shark lovers! There is a wide thila on the outside reef corner between five and seven meters which offers a good start to the dive. The outer reef edge at about 30m is the place where you’ll find most of the action.

As with most kandus this is where the pelagic likes to hunt. Groups of up to 30+ grey reef sharks can be seen, tunas, napoleons, eagle rays and maybe even a hammerhead, bull or tiger shark.

On the reef slope, massive coral heads, large brain corals and spongy leather coral are a feature. Big manta rays are regularly seen at the corner.

Neighbour spot, Maa Kandu Beyru is the outside reef with easy slow drift dive, with a magnificent table- and brain-corals formation that is suitable for beginners. Schools of fusilier, turtles, eagle rays, and sometimes mantas make this beautiful reef and an absolute joy to dive.

One of Addu's highlights! An awesome drift dive into the some of the nicest and most colourful coral gardens the atoll has on offer. There are large coral heads and nurse sharks are found sheltering among them. Expect a steep drop to 30m. On the corner look for sharks and rays. Turtles and napoleons are present all over the reef. Bushy West Channel offers regular sightings of eagle rays.

Perfect for first timerst 'Gan Inside' is dive near the airport. Whereas it is a safe, shallow site, you will be able to see a variety of marine life, including rays, reef sharks and turtles.

Towards the outside of Gan Kandu, there is a small wall starting at five meters. On the top of the reef are wide sandy corridors, sometimes with ten or more resting stingrays. There are also encounters with many hawksbill and green turtles.

PADI 5 Star Aquaventure Dive Center for experienced and novice divers who wants to dive in small groups with a personal care, no supermarket diving and all dives are made within the personal limits of training/experience. Equatorial Divers Lodge is a popular accommodation for scuba divers. Set in the excitement of the Island, the Divers Lodge is a 3-star guesthouse at an excellent location. It provides access to the Atoll's biggest attractions "Scuba Diving & Snorkeling".

PADI 5-star Addu Dive Centre is conveniently located on the outskirts of Addu City, S. Feydhoo. Addu is surrounded by the best diving sites anywhere in the Maldives with an array of majestic reefs, the only reefs with giant mushroom coral gardens housing a rich array of marine species.