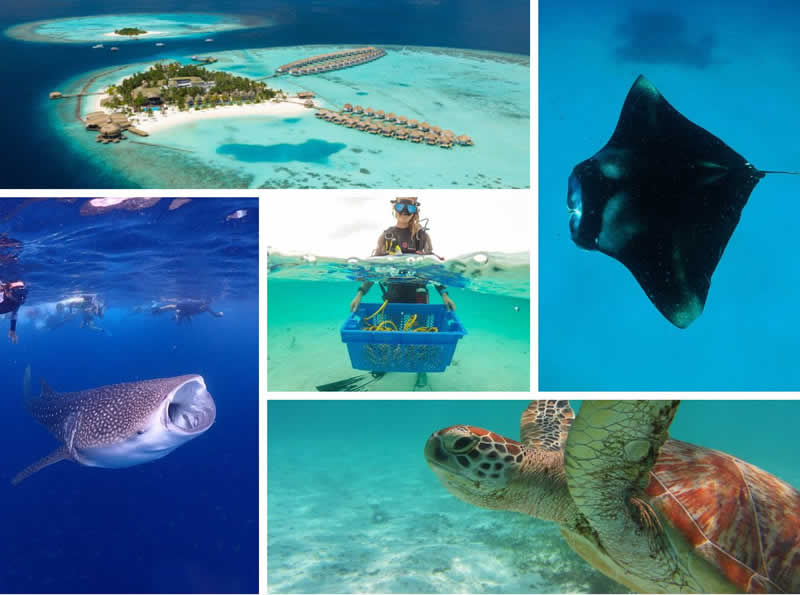 Outrigger Maldives Maafushivaru Resort is playing a key role in gathering and sharing information on manta rays, whale sharks and sea turtles with conservation groups in the Maldives.

The tracking and reporting process, led by the resort’s marine biologist, Lynn Jula Kessler, shows that populations of whale sharks and manta rays in the South Ari Atoll around Outrigger Maldives are stable or doing well. However, there is more concern about critically endangered sea turtles, which often get ensnared in fishing nets travelling between their nesting grounds in Sri Lanka and the Maldives.

On whale sharks, Outrigger Maldives is cooperating with the Maldives Whale Shark Research Programme. Kessler and accompanying resort snorkelling guests collect data on whale shark sightings, noting any injuries, some of which are caused by collisions with boats.

This September, Kessler and Outrigger will join the #GentleToGiants initiative being run by the whale shark research team. The campaign aims to secure commitments from tourism businesses to adhere to whale shark encounter guidelines.

“Many of the whale sharks spotted in South Ari Atoll are juvenile males five to eight metres in length,” says Kessler. “The waters around here are like a boys’ high school for whale sharks,” she says.

Kessler also sends information on manta ray sightings to the Manta Trust, an NGO founded to protect manta rays globally. By sending underwater images of mantas to the trust, conservationists can track new pregnancies, injuries and overall population trends. Manta rays are classified as endangered. They are protected by law in the Maldives, which has the biggest recorded population of manta rays in the world.

"No matter how often I encounter manta rays, they always amaze me,” says Kessler. “Besides being unbelievably graceful, they are also very curious and intelligent. They can often be observed interacting with snorkellers and divers which makes the encounters even more magical."

In July, she conducted coral planting, assisted by guests, adding frames of new coral beneath a jetty at the resort to encourage the breeding of young corals and fish species.

Outrigger would like to hear from journalists who are interested in the OZONE project, marine conservation and sustainable guest activities.

Known for its uninterrupted views of white sandy beaches and a seemingly endless turquoise lagoon, Outrigger Maldives Maafushivaru Resort recently underwent an extensive modernisation. It is now poised to be among the Maldives’ most sought-after vacation experiences.