The World's Best Places to Dive With Hammerhead Sharks 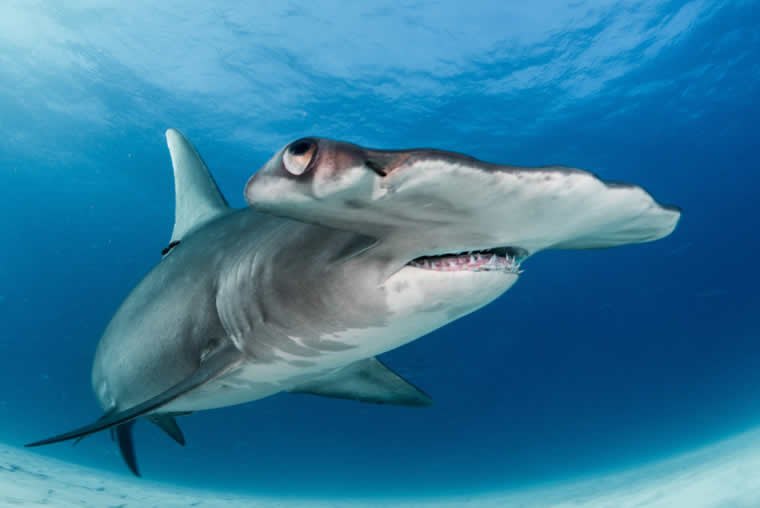 Hammerhead sharks are one of the easiest sharks to identify, thanks to their hammer-shaped heads, and diving with these sharks is one of the best shark diving experiences you can have.

Are hammerhead sharks dangerous to divers?

Hammerhead sharks are a large species of shark but they are not a threat to divers. They have not been responsible for any fatal shark attacks, though they should of course be treated with respect and caution. They are an impressive shark to dive with, though inexperienced divers may wish to dive with smaller sharks first to gain confidence and an understanding of shark behaviours.

What do hammerheads use their heads for?

Hammerhead sharks eat a variety of prey, including fish and shark species, squid, octopus, rays and crustaceans. They use their hammer-shaped head, or cephalofoil, to locate prey such as stingrays buried in the sand.

Where can I dive with hammerhead sharks?

There are nine species of hammerhead shark, with scalloped and great hammerheads being the two species most often encountered by divers. They are found at some of the best dive destinations around the world.

The Maldives needs no introduction as a picture-perfect dive destination, which also happens to be one of the top places to go hammerhead shark diving. Rasdhoo Atoll is known for the arrival of huge schools of fish in the early mornings, which attract numerous hammerhead sharks.

The channel between Rasdhoo and Madivaru islands is world-famous for spotting hundreds of hammerheads and other shark species. Hammerhead Point and Madivaru are two of the best dive sites to see hammerhead sharks at Rasdhoo Atoll.

Many of the scuba diving sites at Rasdhoo are suitable for all experience levels, though the hammerhead shark dives are in deeper water and suited to advanced divers. This atoll is accessible all year, though the best time for hammerhead sharks is December to April.

The Galapagos is another prime destination to experience large schools of hammerhead sharks, whilst also enjoying the phenomenal diving and marine life on offer at this iconic destination. It is paradise for nature-lovers and shark fans.

The sea conditions at these islands can be rough, with large swells and strong currents, and are best visited as an experienced diver. The warm season of December to May is the best time to go hammerhead shark diving to see huge schools of sharks, though there are also large schools of hammerheads from June to November.

There are a variety of Galapagos liveaboards to choose from that cater for different budgets and dive preferences.

Scuba diving in the Bahamas is suitable for all experience levels and the shark dives are conducted at relatively shallow dive sites, with divers kneeling on the sandy bottom and enjoying the sharks and crystal-clear water all around them.

Hammerhead peak season is from December to February, though hammerheads are found at the Bahamas all year. The Bahamas Aggressor offers safaris that include Bimini and Tiger Beach. The Bahamas Master has special Hammerhead and Tiger Shark Experience safaris available each year.

French Polynesia has stunning atolls to dive and an incredible variety of shark diving opportunities; including diving with hammerheads, blacktips, silky, tiger and silvertip sharks.

The Tiputa Pass, Rangiroa is a hotspot for hammerhead shark diving and this atoll channel is washed by a very strong current during the incoming tide. The current attract hammerheads, large schools of grey reef sharks, mantas, tiger sharks and plenty of fish life.

Fakarava atoll is so special that some liveaboards spend their entire itinerary there. Garaue Pass is the best location to go shark diving at Fakarava. Divers can enjoy plenty of hammerhead sharks, plus hundreds of grey reef sharks and manta ray cleaning stations. The current at Garaue is exceptionally strong and this site can only be dived at slack tide.

Given the strong currents and deep dive sites, French Polynesia shark diving is best suited to experienced divers. Hammerhead shark diving is possible from December to April each year, when these sharks congregate in large numbers to hunt breeding eagle rays.

The French Polynesia Master and Aqua Tiki II offer safaris throughout the year to explore this stunning destination.

Costa Rica offers exceptional scuba diving and Cocos Island is no exception, with large schools of scalloped hammerhead sharks, as well as whale sharks, manta rays and a variety of whale species. This unique area is a UNESCO World Heritage Site and is high on the wish list for shark fans.

For diving with hundreds of scalloped hammerhead sharks, Bajo Alcyone can’t be beaten. Divers sit at 25 meters depth on top of a huge underwater mountain and watch as they are surrounded by hammerhead sharks, as well as manta rays and mobula rays.

Diving at Cocos Island is best suited to experienced divers due to the depths and strong currents at dive sites. The hammerhead shark season runs from May to November. Liveaboards that visit Cocos include the Okeanos Aggressor and Okeanos Aggressor II, the Argo and Sea Hunter.

Malpelo Island is a UNESCO World Heritage Site and is part of Colombia, but accessed by select Panama liveaboards. It is a wild and remote shark diving destination, with hundreds of schooling hammerhead sharks.

The main dive area for hammerhead shark diving is Malpelo Island, where divers can enjoy hammerheads in schools of up to 300 sharks, plus Galapagos sharks, whale sharks, silky sharks, reef sharks and huge schools of fish. The best hammerhead shark dive sites at Malpelo include The Twins pinnacles, The Freezer wall dive and La Gringa.

Coiba Island is often included in Panama liveaboard cruises and offers similarly abundant and diverse marine life, with both scalloped and great hammerhead sharks found there. Cathedral Rock pinnacles have a cleaning station visited by hammerheads.

Are there dangerous sharks in Maldives? Is it safe to swim with whale shark? Read this page to learn everything you want to know about sharks in the Maldives.